UK GDP on the rise

In good news for the UK economy GDP increased in the last quarter of 2013 by 0.7 percent over the third quarter. It was though also 1.3 percent lower than the peak in 2008.

When splitting out the four main industrial groupings agriculture saw an increase of 0.5 percent, production a rise of 0.7 percent, services increased by 0.8 percent but construction fell by 0.3 percent. But here the weightings of each of these groupings are worth noting. Splitting GDP down into one thousandths and applying them to each grouping agriculture has a weight of just 7/1000s, Construction 63/1000s, production 152/1000s and services a whopping 778/1000s. So the 0.8 percent increase in services GDP had a very significant effect.

"The UK economy grew at a slightly slower pace over the fourth quarter according to today’s preliminary GDP data although the report gave investors more than enough evidence to expect a much stronger economy in 2014.

"Despite the slight pull-back in Q4, Britain’s economy expanded by 1.9% in 2013, the fastest rate of growth since 2007. The data is likely to keep pressure on the Bank of England to consider a much sooner-than-expected interest rate hike. Unemployment in Britain is now just 0.1% shy of the BoE’s 7% threshold and expectations of rate hikes have seen sterling’s exchange rate against the euro climb by as much as 6.5% over the past six months.

"However, today’s GDP report also showed a slowdown in UK industrial output and construction activity in Q4, meaning the BoE will also be under pressure to monitor the pound’s exchange rate or risk seeing a deterioration in UK exports, particularly to the euro area. Mark Carney should respond in next month’s Quarterly Inflation Report in which the BoE governor’s forward guidance is likely to dampen interest rate expectations and weaken sterling."

“The economy is growing and the recovery gathering momentum. This is good news, and we’re seeing improvement across many different sectors.

“Our new Growth Indicator echoes this building confidence, showing that output in last three months grew at the fastest pace since late 2007, with strong performances in business and professional services, and manufacturing.

“This is a strong platform for an even better year in 2014, and we expect the economy to continue to strengthen.”

"Today's data showed further progress down the road to recovery for the UK economy. GDP in the fourth quarter of 2013 was 2.8% higher than a year earlier, which is somewhat above its long term trend growth rate. Services, manufacturing and construction have all contributed to this broad-based recovery over the past year.

"The data did show a slight moderation in the pace of growth from the previous two quarters, but this was largely due to a downward blip in construction output after two quarters of strong growth. Recent purchasing managers' surveys suggest stronger construction output, so this preliminary estimate could yet be revised up.

"Business services and finance, which account for around 30% of GDP, made the biggest contribution to UK growth in the second half of 2013 after a slow start to the year.

"We would expect the recovery to continue, with the UK economy expected to grow by around 2.5% in this year as a whole. This will keep the UK at the top of the league table for large European economies and broadly in line with expected growth in the US."

“UK GDP expanded by a robust 0.7% in Q4, in line with consensus expectations. Moreover, after continued firm growth through the 4 quarters of 2013, the YoY rate picked up to 2.8% – the strongest since 08Q1. Nevertheless, the level of GDP is still around 1.3% below its pre-crisis peaks: although now recovering at a good pace, the UK has still lagged countries such as France & Germany over the last few years as a whole.”

“GDP growth of 0.7% is encouraging and should boost the confidence of business and consumers alike. With the recovery apparently well entrenched and unemployment falling sharply, consumers feel more secure in their jobs and continue to splurge. Businesses will be increasingly enticed into larger investment projects, as well as hiring more workers.

“The contraction in the construction sector is a surprise, with messages from surveys and the house builders in contrast showing a more positive rebound, opening up the possibility of a future upward revision to GDP.

“The challenge now is to broaden out the recovery beyond the consumer and housing market. The enduring squeeze on real wages will limit the consumers’ ability to continue to drive the recovery forwards. Investment and exports are likely to have improved in Q4, but not enough to drive growth forward at the pace we’ve become accustomed to. So the chances are that the pace of growth will slow a little through 2014.”

“Today’s figures are good news for the British economy, and further evidence that a sustained recovery is taking hold. The financial services sector is playing a central role in driving that growth, with the largest contribution to the increase coming from the services sector, which rose 0.8%.

“According to our new report, the financial and related professional services sector generated a record trade surplus of £61bn in 2013. This figure is bigger than the combined surplus of all other net exporting industries in the UK and is playing a key role in offsetting the UK’s goods trade deficit.

“We’re seeing a 17 year high in optimism amongst firms in our sector as industry confidence builds at a pace not seen since the 1990s. Productivity levels are also well above the average for the UK economy. Whichever way you look at it, financial services is one of the main drivers of the economic recovery.

“UK financial and professional services firms are increasingly the face of British business around the world, ensuring that the UK attracts more Foreign Direct Investment than any other EU member state.

“To maintain this level of investment and ensure we have a sustainable recovery, we need policies which will help to attract jobs into the UK and fuel growth across the country.

“One of the key policy areas where we need a long-term view is taxation. Our research shows that a stable, predictable and globally competitive taxation system is critical to future investment. Measures taken by the Government to improve the UK’s tax competitiveness have been instrumental in securing growth across the UK."

“Another solid GDP figure adds to the list of UK data that continues to paint the picture of a decent recovery. The fact that the annual growth rate in 2013 was the strongest since 2007 is definitely a confidence booster, but one needs to remember the low base from the economy has recovered from.

"Once again growth was lead by the service sector but considering the emphasis on the need for a rebalanced economy, we need to see greater business investment growth, as well as export growth in 2014.

"Good economic news continued in the last three months of 2013 giving the UK its first four-quarter run of growth in over three years. GDP maintained a healthy pace of expansion with the ONS estimate of 0.7% growth coming a touch lower than expectations, mainly due to a small drop in construction.

"Taken together with upbeat business surveys the hiccough in the notoriously volatile construction figures should be a short term interruption in what has been a trend of positive data across all major economic segments in the previous couple of quarters. Indeed Q4 manufacturing growth of 0.9% was bang in line with expectations and survey reports of a strong pick up in production and orders through the final months of last year. Looking to the year ahead, a decent demand outlook at home and steady growth in markets overseas should see industry maintain a robust pace of growth in 2014." 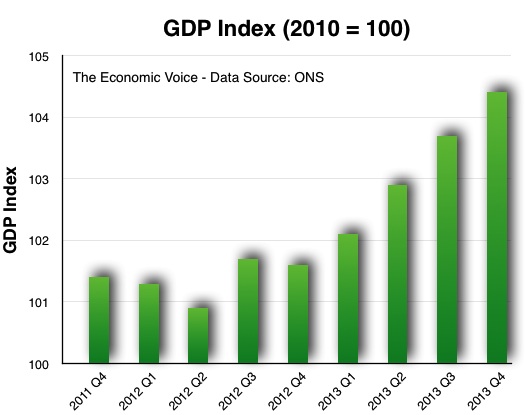 In some parts of the UK over three-quarters of part-time women earn less than the Living Wage, TUC reveals