The 2015 election promises to be the hardest to call in living memory, with the hegemony of the Conservative and Labour parties threatened by the rise of UKIP, the Scottish Nationalist Party and the Green Party, as well as the lingering, although shrinking, presence of the Liberal Democrats. In 1951 97% of the electorate voted for one of the two main parties, whereas their current share of the vote according to the latest polls is around 65%.

However, owing to the vagaries of the UK's 'first-past-the-post system, there is no guarantee that the smaller parties will translate their greater support into parliamentary seats. In 1983 the newly-formed Social Democrat Party secured 11.5% of the popular vote, but won less than 1% of the seats (6). What they did achieve was to split the Labour vote, allowing the Tories to gain 58 seats while their share of the vote dropped from 44.9% to 42.4%. With even more parties now in the mix, the potential for a surprise in individual seats is high, especially as defection patterns are not entirely clear. The main defection channels are Tory to UKIP and Labour to SNP, but there will be exceptions to those. The lowest winning share in 2010 was 29.4% for the Lib Dems in Norwich South, and we could easily see a lower share winning a seat this time. We have yet to see any pre-election agreements between parties (in which one party stands aside to allow another to consolidate its position), but such dealing is a distinct possibility.

Regional voting patterns will also affect the outcome. The SNP will poll less than 10% of the national vote, but is predicted to take anywhere between 30 and 56 seats north of the border, giving it disproportionate influence in Westminster with the power to be 'kingmaker'. The Lib Dems will also probably do better than national polls suggest as they have strong local support, such as in the South West. UKIP, while gaining some traction, will be unable to repeat their success in last May's European Parliamentary elections. Constituency size bias and the lack of boundary reforms favour Labour, who would need to poll around 7% less of the total vote than the Conservatives to attain the same amount of seats.

The electorate faces some stark choices as to how it wishes to see the country governed, and also how it views the future of the UK. The Labour and Conservative parties are now as far apart in policy terms as they have been since the 1992 election, when the Tories unexpectedly held onto the reins of power. Labour promises greater redistribution of wealth and less austerity, while the Conservatives remain a more "market-friendly" choice. However a vote for the Tories is effectively a vote for a referendum on the UK's membership of the European Union. If Labour needs the help of the SNP to gain a majority, then that will raise the prospect of yet another Scottish referendum.

It is likely that the election will lead to more immediate uncertainty. Outcomes range from a majority (very low probability) to a minority government, with several shades of coalition in between. A second election is not out of the question. The outlook for investors, then, might appear equally uncertain. However, our work suggests that the range of outcomes is far less broad from a market perspective. Long-term investors will find little excuse to make big portfolio shifts, although traders might be able to game the outcome. Political developments overseas, including, but not confined to, Europe, Russia, the Middle East and China will have more impact.

Bond investors value certainty, and as such are likely to be unimpressed with any result. There will be uncertainty about the composition of the government, or about potential referendums, which might invite some increase in the 'term premium', raising Gilt yields. However, over the last couple of decades UK yields have tended to follow the path of global yields, and there is no reason for that trend to change dramatically. Neither of the leading parties offers policies that are fiscally irresponsible, although under Labour the deficit would reduce more slowly, and the existing debt burden is currently sustainable. Quantitative Easing in Europe and Japan remains a supportive factor. Inflation is not envisaged to be a problem, nor do we forecast outright deflation as a high probability outcome.

Investment grade corporate bonds, especially of those companies with greater overseas exposure, would be more resilient in the event of higher Gilt yields. Overall we continue to recommend at least some holdings of sovereign bonds as an insurance policy against a currently unforeseen growth shock.

Although we tend not to publish official currency forecasts, it is probable that sterling will provide the 'safety valve' in the event of perceived disruption. Sterling's trade weighted value fell 3% in the run up to the Scottish referendum, although much of that was against a resurgent US dollar. The pound remains dependent upon portfolio and investment flows owing to the UK's persistently high current account deficit. Growing uncertainty about the future of the UK in Europe could undermine those flows, leading to sterling weakness. However, the picture is muddied by monetary policy overseas, with Europe and Japan in particular still easing aggressively, and other countries cutting interest rates as the US and UK remain the best bets for an early rise. This conundrum has been reflected in a rise of implied volatility in the options markets even as the pound has strengthened recently. There is currently no strong valuation case to be made for the pound in either direction.

The overall equity market, like bonds, is likely to remain highly dependent upon global developments, especially as some three quarters of FTSE 100 revenues and earnings are generated abroad. This also provides a natural hedge against any potential weakness of the pound, although, as we saw last year with the Resource companies, sectoral influences can overwhelm that effect. The diagram below attempts to give a qualitative guide to the risks and rewards to different (mainly domestic) sectors relative to the colour of government. It is a notably asymmetric picture, with a Labour-led regime being more punitive than a Tory-led government is favourable. Not only has Labour voiced more overt populist policies, but the Conservatives also acknowledge that they must not be seen to be feathering capitalist nests.

Banks, Utilities and Bus & Rail companies stand to bear the brunt of Labour's populist agenda, with Outsourcing companies also recently mentioned. Bookmakers stand to lose income from Fixed-Odds Betting Terminals. The Tories have not expressed outright support for any of these industries, but will be more keen to defend the UK's position in the financial services industry. Any relief bounce will be limited by pragmatism and the likely need to appease any coalition partners. 'Mansions' lose out on both counts, with Labour taxing them and a potential EU referendum keeping buyers at bay, with Real Estate Investment Trusts ('REITs') potentially suffering in the same way. Housebuilders are the one sector to achieve all-party support, although it's not clear how much profit they would be allowed to make. Asset Managers could lose out if Labour tightens the noose on pension tax allowances. Other large sectors such as Oil & Gas, Mining and Healthcare have limited exposure to domestic policy, so are excluded from this exercise. Small and Mid-Cap indices, which are more exposed to the UK, have rallied again in response to the economic recovery. If that is curtailed owing to political concerns, large cap multi-nationals stand to outperform. Please bear in mind that the value of investments and the income derived from them can go down as well as up and that you may not get back the amount that you have put in. 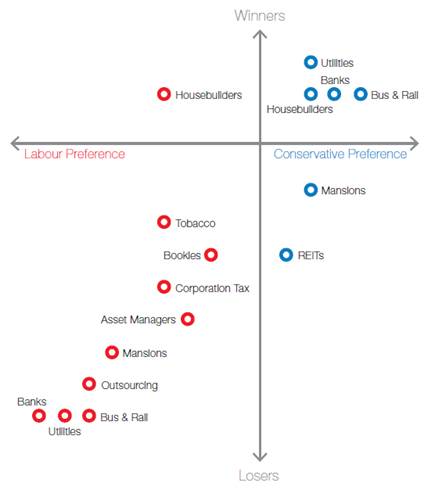 A blueprint for a new RTGS service for the United Kingdom

Responses to the Queen's Speech