UK property prices have fallen 0.2% this month according to new house price statistics from Adzuna.co.uk. UK average for sale asking prices have dropped Â£4,048 in the last 3 months to Â£294,939 in November, but London, the South East & Wales are bucking the trend with price rises of up to 0.9%.Â  The rental market remains strong with an average monthly rent rise of 0.2%.

The new data, sourced from Adzuna’s ‘Market Insights’ tool which launches today, indicates the fall in house prices is being felt across much of Britain, with the North East & South West of England seeing the sharpest declines with the average property in South West England now being listed at Â£278,437, 6.8% down on the summer months.

Over the last 6 months, only a handful of towns and cities outside of London have been immune to the house price fall. Southern English towns such as Canterbury and Maidstone are some of the best performers, up 4% in the last 3 months; and Welsh towns like Swansea are also bucking the trend.

While bargain hunters will be flocking to cities such as Bristol, Middlesbrough & Plymouth where property prices are down nearly 6% since the beginning of the year, the Prime Minister will be looking with concern at these areas, given the news that Adzuna’s data powers the ‘Number 10 Dashboard’, used daily by the PM and other senior officials to aid government decision making on housing and the economy.

“Because we list all of the available properties in our search engine, Adzuna’s statistics offer the most up to date and comprehensive index of UK property asking prices available. We’re thrilled to be making available the same real-time data to our users that we do to the Prime Minister” said Doug Monro, the company’s Co-Founder. “Our asking price index highlights a continued lack of seller confidence following the Olympics and a bid to attract buyers before the Christmas slowdown; however the rental data shows continued strength in flats in particular.”Â  Adzuna’s full house price statistics can be seen at http://property.adzuna.co.uk. 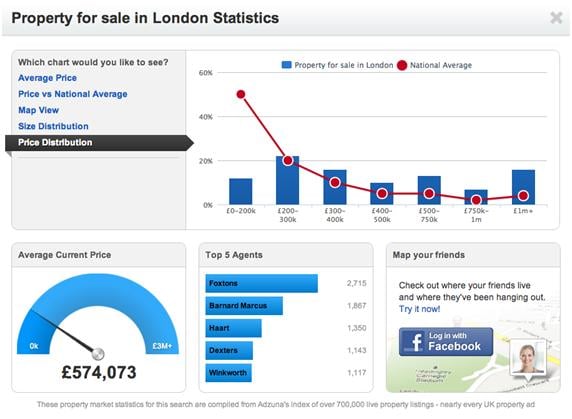 Some example nuggets extracted from the data: