The price of an average house is still however 0.6% higher than it was a year ago says the lender.

The Nationwide also expects the supply/demand equation to rebalance in the favour of the buyer in the months ahead, which may lead to further downward pressure on house prices.

But we are still, says the report, far from seeing a flood of properties coming on to the market so prices are more likely to move sideways rather than firmly down.

Given the challenging conditions prevailing in late 2011, with the UK economy contracting in the final three months of the year, it’s not surprising that house price growth softened at the start of 2012. The price of a typical house fell by 0.2% in January, taking the annual rate of house inflation down to 0.6% from 1% in December.

The demand/supply balance may move further in favour of buyers in the months ahead. The economy is not expected to gather much momentum until the second half of 2012 at the earliest, which suggests that labour market conditions and buyer sentiment may be slow to improve.

Nevertheless, with the flow of properties coming onto the market still more of a trickle than a flood, house prices are likely to continue to move sideways or only modestly lower in the months ahead.

But, although control may be moving towards the buyer where demand v supply is concerned, there are still the combination of factors that will still put a significant hurdle in the way of buyers especially the first time buyer. House prices are still at very high levels, job security has not improved, saving for a deposit with low returns on savings is hard and getting a mortgage can prove very difficult even with the current low interest rates. Nationwide itself has just increases some of its rates by between 0.1%-0.2%, although its 95% LTV offerings have stayed unchanged.

But also remember that a 0.2% drop in house prices is a blip on a graph when you look at the big picture as indicated on this graph that shows the main house price indexes on the same chart. 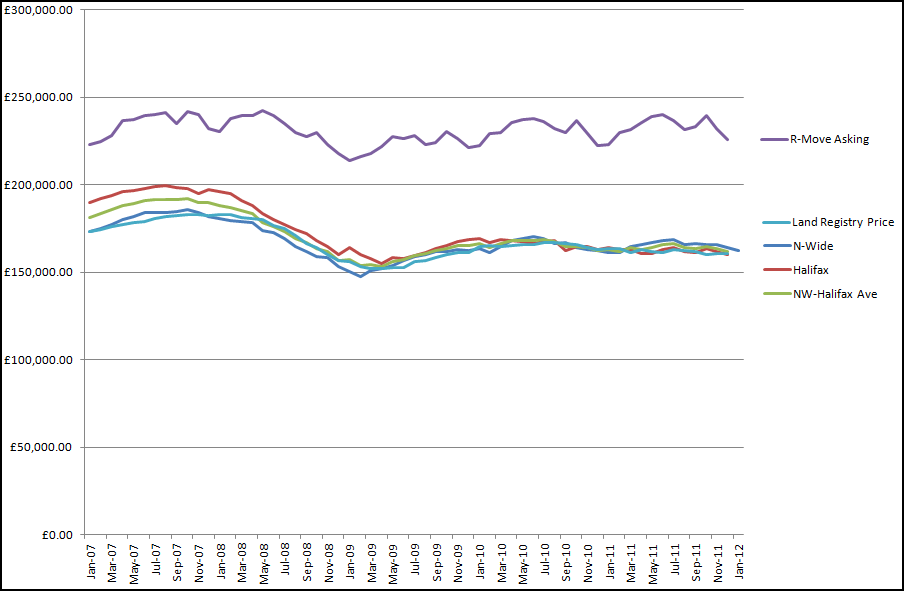