The Nationwide reports that, according to its house price index, house prices in the UK grew by 0.4 percentage in March and were also 9.5 percent higher than the same time last year.

The price of an average house is now £180,264 according to the building society.

There are however small signs that price increases are moderating said the lender as the 0.4 percent growth seen in February was lower than tyne previous month's 0.7 percent.

House prices are now increasing across the country said the Nationwide with all thirteen regions experiencing annual house price gains in the first quarter of 2014.

But as ever it is London and the South East leading the way with prices London, the Outer Metropolitan and Outer South East surpassing their pre-crisis peaks.

"London house prices were up 18% year on year in Q1," said Robert Gardner, Nationwide's Chief Economist, "taking the price of a typical home in the capital to £362,699 – more than twice the level prevailing in the rest of the UK when London is excluded. Indeed, the gap between house prices in London and the rest of the UK is the widest it's ever been, both in cash and percentage terms…".

He also said: "There is little doubt that the recovery in the housing market is now firmly established, with activity levels picking up and house prices recording their fifteenth successive monthly increase in March.

"There are some tentative signs of moderation, with the monthly pace of price growth slowing to 0.4% in March down from 0.7% in February and 0.8% in January. Nevertheless, viewed in annual terms, price growth is continuing to run at a robust pace, with the price of a typical home 9.5% higher than in March 2013."

Looking at the two house price index graphs below, the first showing figures for Rightmove, Land Registry, Halifax and Nationwide as well as an average of the Halifax and Nationwide while the second is an expanded view of excluding the Rightmove HPI, you can see that there has now been a lentthy period of house price growth. But the Land Registry figures appear to be lagging the lenders', which may indicate that house price growth where mortgages are involved is higher than where cash sales are also put into the mix. 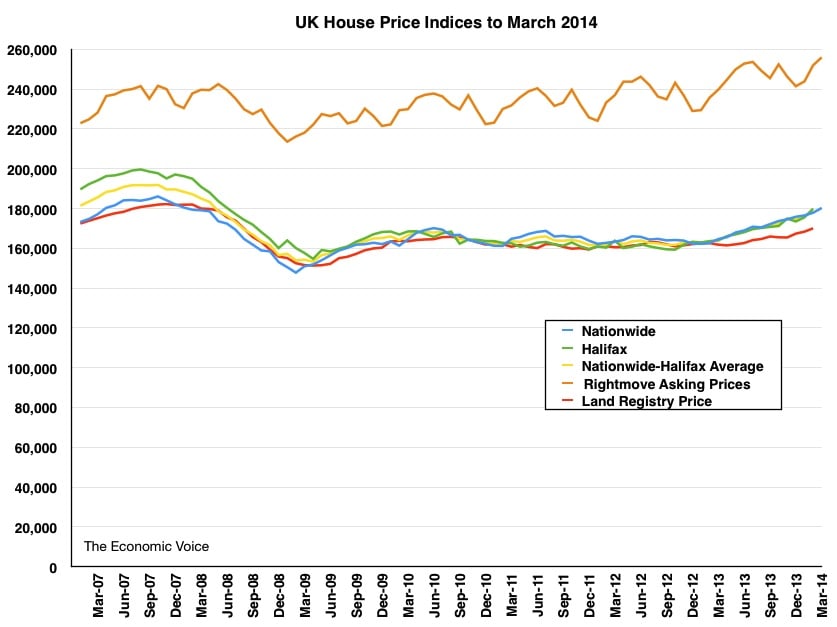 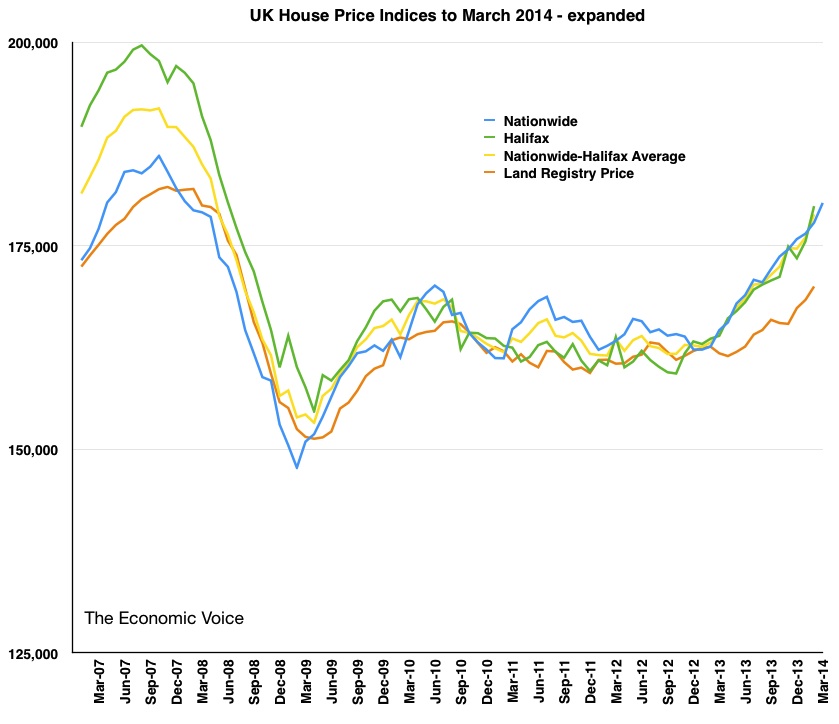