The average price of a house in the UK in May was £220,713, according to data compiled from HM Land Registry, Land and Property Services Northern Ireland, the Office for National Statistics and Registers of Scotland. This is an increase on the £219,542 seen in the year to April.

As the property market continues to rise, inflation figures out today show that annual CPIH (inflation including homeowner/occupier costs) dropped in June to 2.6 percent and wage growth in the year to May was 1.8 percent. 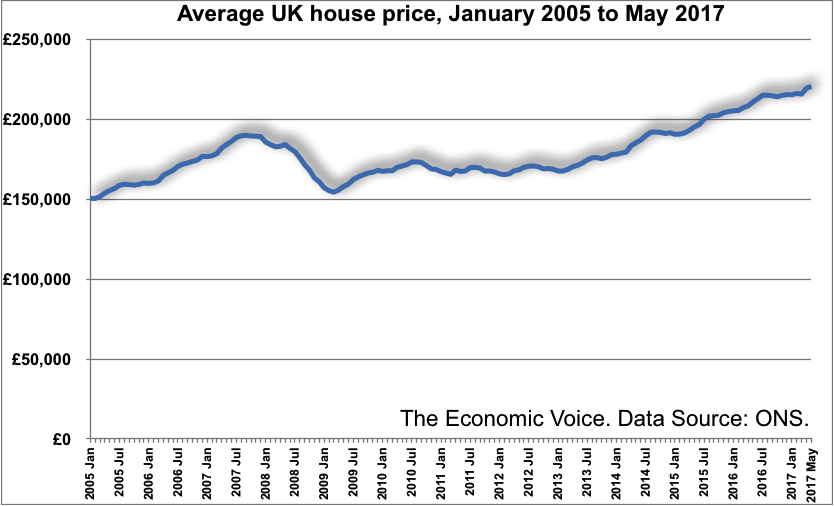 Since May last year house prices in the UK by country have fared as follows:

“Today’s housing market data from the ONS and Land Registry shows a gradual slowdown of house price growth, in-line with our expectations that growth in 2017 will be around half that of 2016.

“Today’s figures are the first to be released since we published our latest housing market projections in the UK Economic Outlook. Our main scenario anticipates a softening of the market over the year with house price inflation falling from 7% in 2016 to 3.7% in 2017. We expect London to be one of the UK’s worst performing regions, achieving price growth of just 2.8% in 2017. The key drivers of this slowdown are uncertainty related to Brexit and a softening in the economic outlook.

“The latest regional data is showing the strongest performance in East Anglia and the East Midlands, which registered annual growth of 7.5% and 7.2% in May respectively.”

“However it’s worth bearing in mind that the ONS’ measure of house price inflation lags behind many other measures as it is based on mortgage completions, and it is also subject to revisions.

“Housing market activity is currently lacklustre amid weakened consumer fundamentals. The latest data from the Bank of England shows that mortgage approvals for house purchases only edged up in May after slowing over the previous three months to a seven-month low in April. Consequently, mortgage approvals in May were still at their second lowest level since September 2016.

“House prices look unlikely to rise by more than 2% over 2017 and they are expected to be essentially flat over 2018.

“The fundamentals for house buyers are likely to deteriorate further over the coming months with consumers’ purchasing power continuing to be squeezed by inflation running higher than earnings growth. It is also very possible that the labour market will increasingly falter despite its current resilience. Additionally, housing market activity is likely to be hampered by soft consumer confidence and a reduced willingness to engage in major transactions.

“Potential house buyers may also be concerned by recent signs that the Bank of England could be close to hiking interest rates (although this looks less likely after the June dip in inflation). While any increase in interest rates would be small and mortgage rates would still be at historically very low levels, the fact that it would be the first rise in interest rates since mid-2007 could have a significant effect on housing market psychology.

“Housing market activity and prices are also likely to be impacted by stretched house prices to earnings ratios and tighter checking of prospective mortgage borrowers by lenders. According to the Halifax, the house price to earnings ratio reached 5.80 in December (the highest level since August 2007) and was still as high as 5.66 in June. This is well above the long-term (1983-2017) average of 4.19. Furthermore, mortgage lenders are under pressure from the Bank of England to tighten their lending standards.

“The downside for house prices should be limited markedly by the shortage of houses for sale. High employment and very low mortgage rates are also supporting prices. The June RICS survey showed new instructions to sell fell for a 16th month running in June, sending average stock levels on to a new low.”

“Against a backdrop of increased political and economic uncertainty, house prices have slowed in their march upwards, suggesting that buyers are starting to feel the pressure of falling real wages and entering the market in fewer numbers. But demand is only half of the story, insufficient housebuilding continues to restrict the number of available homes for sale, which may not be creating house price pressure at the moment, but will when demand begins to pick up again.

“While the pace of house price growth may have slowed, house prices still continue to rise, ultimately meaning that fewer people can afford to buy, which can only place greater pressure on the UK’s rental sector. For that reason it’s essential that new construction is planned across all tenures, so that rents don’t escalate to the point where they’re inhibiting aspiring homeowners’ ability to save for a deposit. Quite simply, we need to build more purpose built rental homes to support those hoping to take their first steps onto the property ladder.”

“Today’s 4.7% annual house price growth for May shows that, despite the slight slowdown, the housing market is still simmering away nicely. Even though the overall growth rate has fallen, for first time buyers the slower rate of house price growth will be welcome, particularly with inflation running ahead of wages for many.

“However, the headline figure masks a lot of regional variation, with price growth particularly strong in the East of England (up 7.5% year on year) and the East Midlands (up 7.2%) but more sluggish in London (up 3.0%).  There is a complicated cocktail of house price growth, inflation and wage growth that varies significantly through the regions, which means buyers are having very different experiences of the housing market depending on where they are buying.

“Our recent research found that average deposits climbed £6,000 in the last year, with increases in some regions of over 30%.”