The Nationwide building society today reports that the price of an average house rose by 0.1 percent in July to £189,949. This, says the lender, is the slowest rate of increase that it has seen for fifteen months in April last year.

As can be seen from the UK House Price Index graph below, this slowing down follows on from recent reports Rightmove, the Halifax and the Land Registry of falling or stagnating house prices. This though may have more to do with normal seasonal variances and activities – peoples’ minds are concentrated more on holidays than property – rather than an indication of the start of a longer term trend. 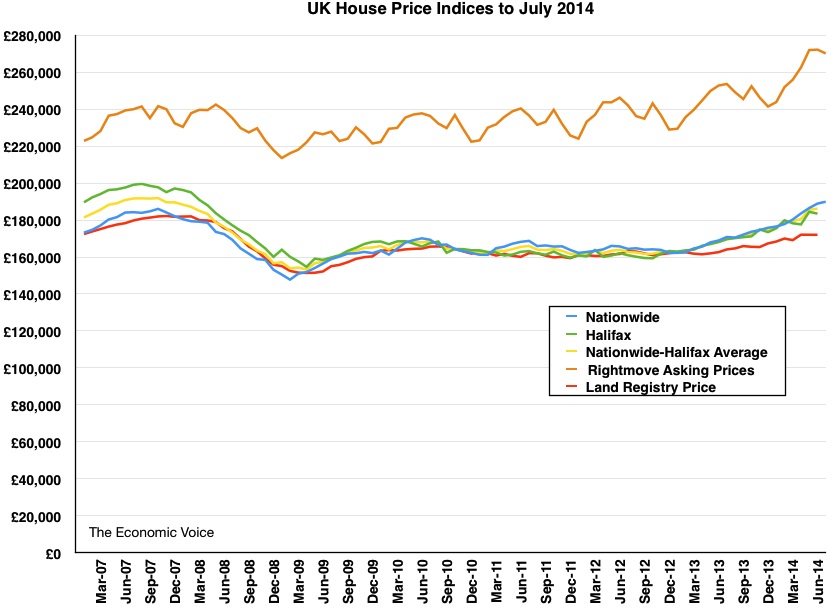 But Robert Gardner, Nationwide's Chief Economist, did point to some other factors saying:

"Although UK house prices recorded their fifteenth successive monthly increase in July, the pace of growth slowed. The price of a typical home increased by just 0.1% over the month, while the annual rate of price growth moderated to 10.6% from 11.8% in June.

"The slowdown was not entirely unexpected, given mounting evidence of a moderation in activity in recent months. Mortgage approvals declined by almost 20% between January and May, and there has also been some softening in forward looking indicators, such as new buyer enquiries."

He went on to say that the mortgage market review had an impact on slowing the market but the rebound in approvals in June may mean that the pullback was temporary. He also said that house prices in the future ‘will remain crucially dependent on supply side developments’.
The taxman has also benefited from rising prices, which resulted in ‘a sharp increase in stamp duty revenues’ said the lender.

VCT Sector Set for More Inflows Over the Next 12 Months

How to prepare your business for the unexpected