UK house prices rose by 11.7 percent in the year to August 2014 says the Office for National Statistics. This level of annual house price inflation is unchanged from the previous month.

On a regional basis, house prices in England rose by 12.2 percent, in Wales by 4.7 percent, in Scotland by 6.7 percent and by 9.6 percent in Northern Ireland.

London of course saw the largest leap in house prices of 19.6 percent. South East England saw rises of 12.3 percent and the East of England 11.6 percent.

After removing the London and South East effect house prices in the rest of England rose by 7.8 percent in the year to August.

Between July and August average house prices rose by 0.6 percent on a seasonally adjusted basis.

First time buyers are still bearing the brunt of house price rises with the cost of their purchase rising by 12.9 percent as opposed to homeowners moving into a subsequent house who saw rises of 11.2 percent. 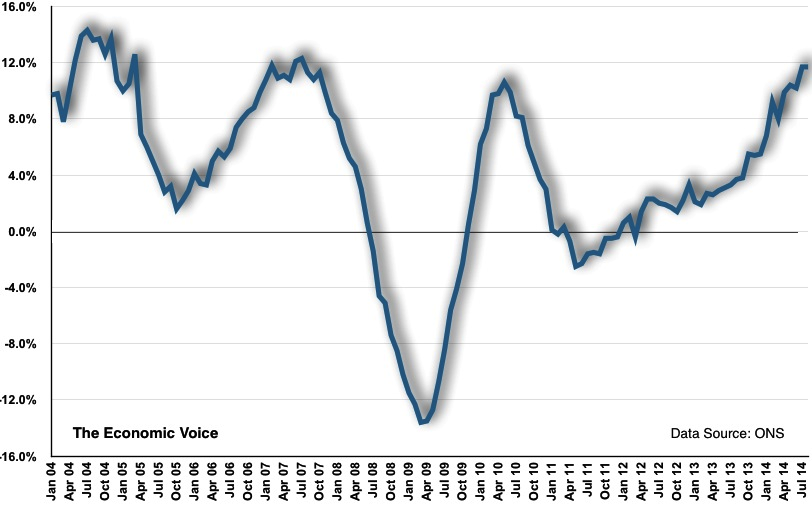 “The latest figures from the ONS show property price rises display little sign of abating, with increases of 11.4% in the year to August, the same annual increase seen in July. However, tighter lending regulations coupled with prices that to many seem out of reach – in London and the South East in particular –  have started to introduce a note of caution. Recent findings have also shown that buying a home in London is now less affordable than it was at its previous peak in 2007 adding to these worries.*

“Although London and the South East have seen monumental growth in recent months, it is worth noting that regions outside of this have seen far more modest increases – 7.8% increase compared to the same period in 2013 – which will come as welcome news to many homeowners in these areas, with some having spent several years in negative equity after the financial crash hit. For many, a boost to house prices comes as long-awaited news and a sign of a recovering market.

“Rising house prices have also eased restrictions on those who would have previously been unable or unwilling to remortgage and frees up that option for many more. Improving prices mean more homeowners have the ability to utilise the competitive low-rate products currently available with sufficient equity in their house to do so. There are a range of excellent rates available at present and now is the time to take advantage of this.

“Despite this, first-time buyers still face a challenge in stepping on to the property ladder with increased restrictions in affordability criteria and mortgage lending, along with added caution ahead of uncertainty surrounding a base rate rise. While we welcome prudent lending checks, it is important that the young are not unfairly penalised to see their dreams of purchasing a home crushed.”