Land Registry/ONS report 1.1% rise in UK house prices in July; with the year-on-year increase stable at 5.1%. There have been signs recently that the UK housing market activity may be picking up from its recent lows. In particular, mortgage approvals picked up in July.

However, we remain sceptical about any marked housing market upturn. Housing market activity remains under pressure from the serious squeeze on consumers, weakened confidence and heightened caution over engaging in major transactions. Latest survey evidence generally still points to lacklustre activity. We see house prices likely rising around 2-3% over 2017 with another modest rise of 2% likely in 2018. The downside for house prices should be limited markedly by the shortage of houses for sale. High employment and very low mortgage rates are also currently supportive

“The Land Registry/ONS reported that house prices rose 1.1% in July. The year-on-year (y/y) increase in house prices was stable at 5.1% in July. Annual house price inflation has firmed modestly since moderating to a low of 4.6% in May from a peak of 8.2% in June 2016 (the highest since October 2014).

“We need to keep in mind that the ONS’ measure of house price inflation lags behind many of the other measures as it is based on mortgage completions. It is also subject to major revisions. Furthermore, annual house price inflation on both the Halifax and Nationwide’s measures are lower, standing at 2.6% in the three months to August on the Halifax measure and 2.1% in August on the Nationwide measure.” 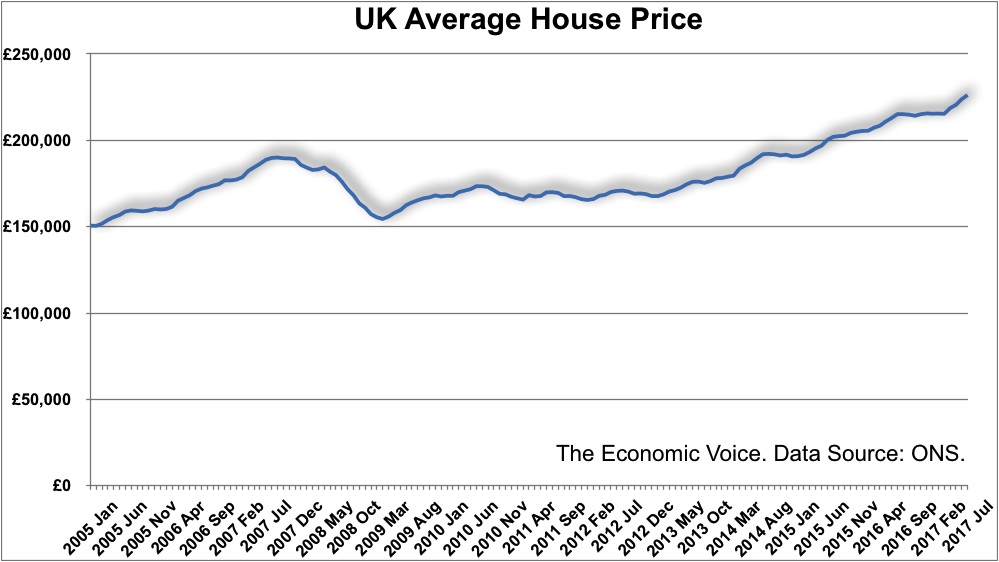 “The Bank of England (BoE) reported that mortgage approvals for house purchases picked up more than expected in July to reach the highest level since March 2016.

“We are dubious that July’s marked pick-up in mortgages approvals marks the start of a significant upturn in housing market activity. Mortgage activity can be volatile on a monthly basis.

“Despite July’s pick-up in mortgage approvals and the firm looking ONS price data, we retain the view that house prices are likely to rise by 2-3% over 2017. A modest rise around 2% also looks likely in 2018.

“The fundamentals for house buyers are likely to remain weak over the coming months with consumers’ purchasing power continuing to be squeezed by inflation running higher than earnings growth. Additionally, housing market activity is likely to be hampered by weakened consumer confidence and limited willingness to engage in major transactions.

“Housing market activity and prices are also likely to be pressurised by stretched house prices to earnings ratios and tight checking of prospective mortgage borrowers by lenders. According to the Halifax, the house price to earnings ratio reached 5.80 in December (the highest level since August 2007) and was still as high as 5.71 in August. This is well above the long-term (1983-2017) average of 4.21. Furthermore, mortgage lenders are under pressure from the Bank of England to tighten their lending standards.

“The downside for house prices should be limited markedly by the shortage of houses for sale. High employment and very low mortgage rates are also currently supportive.

“There is a possibility that potential house buyers may also be concerned by the BoE indicating that interest rates could eventually rise more than the markets currently expect, although the likelihood of a near-term hike has seemingly receded. While any increase in interest rates would be small and mortgage rates would still be at historically very low levels, the fact that any interest rate hike would be the first rise since mid-2007 could have a significant effect on housing market psychology.”