The latest trade figures from the Office for National Statistics (ONS) shows that the UK did a record amount of trade with China.

In the three months to November exports to China increased 9.6% to £3.3 billion and imports from China increased 1.7% to £8.6 billion, both record highs said the ONS. This does of course put a lot of pressure on the deficit side.

Overall the trade deficit was £3.2 billion in the month of November 2013, slightly better than the £3.5 billion seen in October.

This was driven by the £9.4 billion deficit in goods trade, which was partly offset by the £6.2 billion surplus in services.

As looking at one month in isolation can be misleading the ONS also provides data on a three monthly basis. 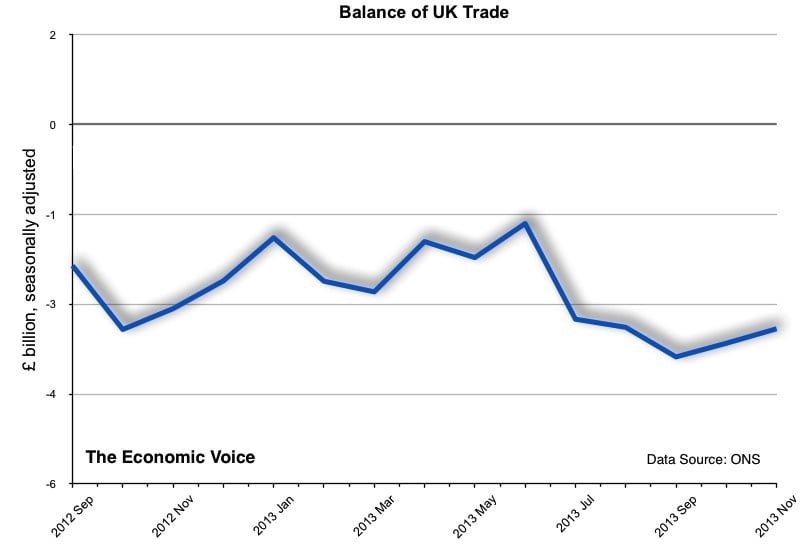 For the EU on a three monthly basis:

• Exports to countries within the EU decreased by 5.2% to £37.5 billion in the three months to November 2013 reflecting a fall in oil exports of £1.7 billion.

For countries outside the EU on a three monthly basis:

• Imports from countries outside of the EU decreased by 4.3% in the latest three months and were 3.1% lower compared with the same three months in 2012.

"The latest trade numbers were generally positive, with tentative signs that the UK recovery may be starting to broaden out into exports. Stronger demand from the Eurozone has come as a welcome development. A sustained rise in demand from the bloc could provide a strong impetus to the UK economy.

"The consumer cannot continue to drive the UK recovery single handed for much longer, so more solid evidence of support from exports would be welcome. And recent business survey data provide some encouragement that we will start to see a sustained improvement in the official series over the next few months.

"Prospects for exports do look more positive now than they have done for some time. The US economy is once again growing strongly, while the Eurozone recovery should gradually gain momentum. And the recent appreciation of the exchange rate should not represent a significant impediment – as has been proven over the past five years UK exports are not particularly price sensitive."