The latest data from the Office for National Statistics shows that the Consumer Prices Index (CPI) grew at 1.2 percent in the year to September 2014. This is down from the 1.5 percent seen in the year to August.

The now unofficial measure of inflation that includes housing costs (CPIH) fell from 1.5 percent in August to 1.2 percent in September.

The ONS said that “… falls in transport costs (notably sea fares and air fares) and prices for a range of recreational goods provided the largest contributions to the slowdown in the rate of inflation between August and September. 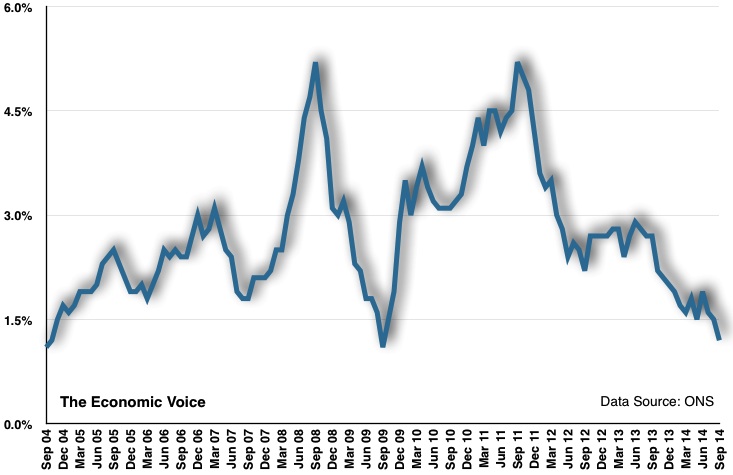 “The squeeze on working people continues despite this fall in the rate of inflation. Total pay is rising at just 0.6 per cent, which is half the rate of CPI inflation announced today.

“Working people whose real wages have fallen by £1,600 a year since 2010 face a further hit if the Tories win the election and cut tax credits again. George Osborne's Strivers' Tax will see a one earner family earning £25,000 and with two children lose almost £500 a year.

“Labour’s economic plan will tackle the cost-of-living crisis and earn our way to higher living standards for all, not just a few at the top. We will balance the books in the next Parliament, but do so in a fairer way.”

“Inflation has dropped to a five year low in September largely due to an intensified food price war. With core inflation also slowing, it appears that the low inflation environment is here to stay.

“Bolstered by falling oil prices, there is little sign of any inflationary pressures in the horizon. If anything, there is reasonable chance that inflation could dip below 1% around the turn of the year, which would lead to letter writing from Mark Carney to the Chancellor.

“Against this backdrop, the chances of the MPC voting for an increase in interest rates this year have fallen to practically zero. Particularly given that the Inflation Report predicted an inflation rate in September at 1.7%. Unless inflation begins to pick up soon, it is likely that the first hike will be pushed out towards the middle of next year, if not later.

“September’s inflation rate usually has important ramifications for public finances, as it is used to uprate benefit payments. However, with government policy limiting growth in most working age benefits to 1% next year, the net gain to the Exchequer from a lower inflation reading will be limited. However, pensioners are set to enjoy a relative windfall. With inflation and earnings growth so low, the ‘triple lock’ means that pensions are set to rise much faster than pay or benefits received by younger people.”

“Inflation has generally been falling since mid-2013, due to lower global commodity prices and the rise in Sterling pushing down on import costs. At home, heavy discounting among supermarkets is also likely to have exerted downward pressure.

“We expect inflation to remain below the Bank of England’s 2% target out to next year, with both global and domestic inflationary pressures remaining subdued.

“Our forecast is for a first interest rate rise in spring next year, as growth maintains solid momentum. However, this latest fall in inflation is likely to intensify the debate around timing further.”

Ed Miliband calls for bad bankers to be ‘struck off’