The annual rate of Consumer Prices Index (CPI) inflation fell from 1.8 percent in April to 1.5 percent in May says the Office for National Statistics.

Apart from a slight rise in April, CPI has now been falling steadily since back in June 2013 when it was 2.9 percent. Inflation is now running at its lowest level since October 2009.

“Over the last five years, the three main contributors to the 12-month inflation rate have been food & non-alcoholic beverages, housing, water, electricity, gas & other fuels and transport (including motor fuels). Combined, these three sectors have, on average, accounted for almost half of the 12-month” inflation rate each month.” Said the ONS report.

It went on to say that “The 12-month inflation rate for food & non-alcoholic beverages is currently at its lowest level for over nine years with prices falling by 0.6%. This is the first price fall on the year since March 2006. However, since March 2006, prices for these goods have increased more than half as much again as the all items CPI (42% compared with 27%).”

The annual rate of inflation of CPIH (the inflation measure that includes owner occupiers’ housing (OOH) costs also fell from 1.6 percent in April to just 1.4 percent in may. 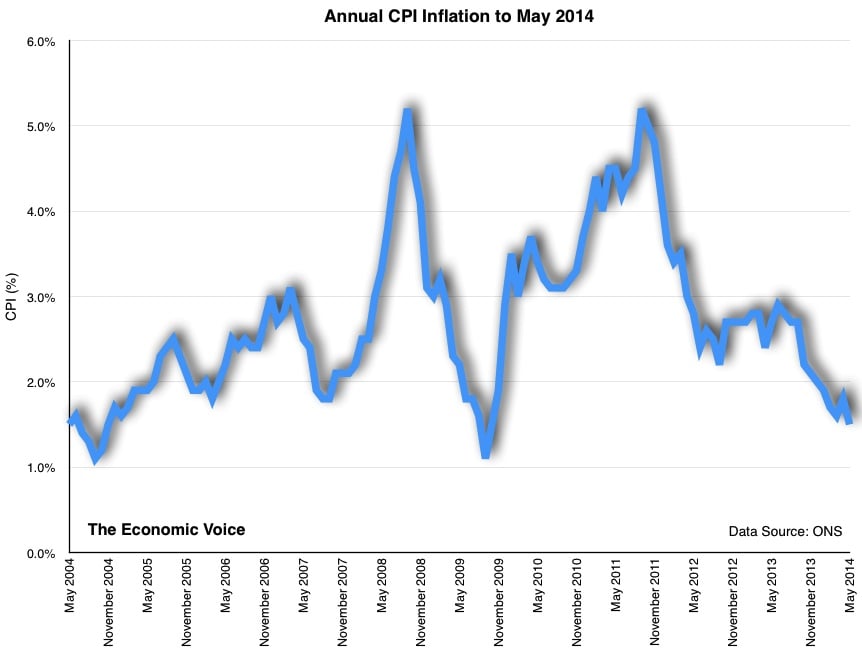 “Following an Easter-related rise in April’s inflation, this drop-back is not surprising. May’s decrease takes the CPI measure to its lowest rate since October 2009. While rising petrol prices in May exerted some upward pressure on inflation, this was more than offset by the unwinding of the boost to prices in April arising from the late timing of Easter. Most noticeably, airfares saw a hefty drop and annual food price inflation turned negative for the first time since March 2006.

“Looking forward, inflation is likely to remain below the MPC’s 2% target for some months to come. While the recent rise in oil prices, linked to the troubles in Iraq, is one blot on the landscape, any pressure on firms to raise prices as a result of higher wage demands still remains noticeable by its absence. Furthermore, our expectation that productivity will recover should ease cost pressures. A further rise in the value of sterling, triggered by Mark Carney’s surprisingly hawkish comments on interest rates, should also constrain inflation.

“That said, contrary to Mr Carney’s hints, with inflation well below target and currently running short of the MPC’s Inflation Report forecast for Q2 as a whole, the case for a near-term rise in rates is looking far from strong.”