The latest set of CPI and RPI data from the Office for National Statistics shows that inflation is falling in the UK.

This graph shows that over the last year inflation has trended down but is still well above the Bank of England’s 2% target. 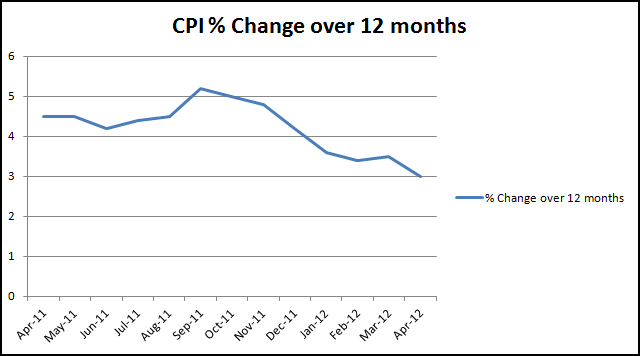 But just because inflation is coming down it doesn’t mean that the pressure on your finances is easing. While inflation exists the cost of living goes up and, if not offset by wage increases and/or tax decreases, then the real cost to families goes up. This next graph shows how the cost of living increases even as inflation falls. Just be aware that the graph looks steep because the axis chosen shows data between 117 and 124, if it showed the full range it would look a lot flatter. 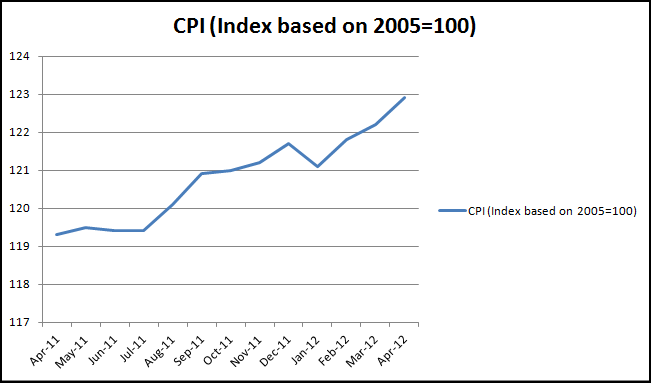 The ONS says that the upward pressures on CPI were “…the operation of personal transport equipment, restaurants & hotels and rents” and the main downward pressures were “air transport, off-sales of alcohol, clothing and sea transport”.

RPI downward pressure was applied by “…alcoholic drinks, clothing, fares & other travel and the purchase of motor vehicles” almost offset by the upward pressure from “…housing and petrol & oil”.

Melanie Bowler, economist at Moody’s Analytics said: “UK inflationary pressures eased in April and the inflation rate will continue to come down through the rest of 2012, unless oil prices spike once again. The price of Brent has fallen sharply in recent weeks as the euro zone crisis threatens global growth, encouraging investors to move into safer assets. Brent has fallen below $110 per barrel, down from a recent peak of $127 in late February. It is also below its year-ago price. This suggests consumer prices should ease further. Furthermore, weak domestic demand and subdued wage growth— annual wage growth including bonuses was just 0.6% in the first quarter—will ensure domestic price pressures remain contained.

However, the Bank of England does not expect inflation to fall off as sharply this year as previously forecast. This puts paid to further quantitative easing unless the economy is subjected to a shock. The euro zone's sovereign debt crisis remains the key risk. According to the bank’s latest quarterly inflation report, near-term inflation is higher than estimated in February and the bank does not expect inflation to dip below the 2% target before early 2014, rather than in early 2013 as previously forecast.

However, we believe the dip below target is unlikely given the bank also estimates that GDP growth will pick up to around 2.6% in two years after struggling to grow through 2012. With U.K. growth estimated to be well above potential by that stage, and the global economy likely to be on a much stronger footing, price pressures are likely to be relatively strong. The U.K. inflation rate has been stubbornly elevated since 2005 and has averaged around 2.3% over the past decade. Nevertheless, the BoE is not expected to start raising interest rates from their record low of 0.5% before 2014.”

Andrew Goodwin, senior economic advisor to the Ernst & Young ITEM Club said: “These figures will be music to the ears of the MPC. After a brief delay, caused by the spike in oil prices, we are now seeing the temporary factors, which had caused inflation to remain elevated last year, dropping out of the calculation and bringing inflation rates down.

However, while the Governor has escaped having to write another open letter this month, there is still a chance that he will have to pen another in June. These figures were heavily influenced by Easter being earlier this year, with the impact on air and sea fares reducing inflation by almost 0.3%pts, but we would expect this to reverse next month. On the flip side, the plunge in petrol prices – by around 5 pence per litre since mid-April – should help to mitigate the impact on headline inflation rates.

And other factors also point to inflation rates coming down over the next few months. Non-oil commodities prices have also dropped back, causing producer input cost inflation to slow sharply, and this should feed along the supply chain as we move through the summer. The recent rise in sterling will also help in this respect, magnifying the impact of the falls in dollar-denominated commodity prices.

Overall, today’s data strengthens our conviction that inflation will be back close to the 2% target by the end of the year. This in turn should give the MPC the full flexibility to react, and provide extra monetary stimulus, should the situation warrant it.”

KPMG Chief Economist, Andrew Smith, said: “Amidst the gloom, some good news at last. In the face of recent hiccups, confirmation that the inflation rate has resumed its downward trend is extremely welcome – not least to the Monetary Policy Committee which has appeared increasingly stymied by the co-existence of both a weak economy and sticky prices.

The fall puts inflation back on track to hit the two per cent target sooner than the Bank of England’s forecast of mid-2013 and paves the way for further quantitative easing to support growth.

But in the meantime households continue to struggle. Real wages are still falling and the headwinds of elevated unemployment, low wage growth and high inflation look set to remain a drag on the economy for some time to come.”

Will tomorrow's retirees be living on the poverty line?