Apart from April 2015 the annual CPI inflation rate has been either zero or negative 0.1 percent since February 2015.

The Office for national Statistics said that this was mainly down to falls in clothing and food prices along with smaller rises in air fares than a year ago and that there were no large upward effects to offset the change.

The inflation measure that includes homeowner occupier costs (CPIH), which is not an official national statistic, rose by 0.3 percent over the year to June compared to the 0.4 percent seen in the year to May 2015. 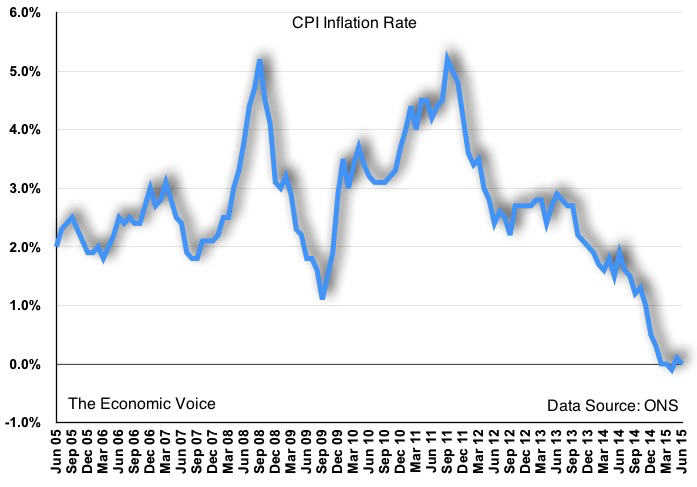 "Price inflation remains elusive. While this is likely to persist in the coming quarter, inflation should rise relatively swiftly from the end of 2015, as the effect of past falls in oil prices fades.

"Inflation of below 1% over the rest of this year should give the MPC enough breathing space to leave interest rates unchanged at least until early 2016."

"Inflation being so far below target shows that the strength and stability of the recovery can't be taken for granted. The Chancellor has to fix the fundamental problems with the economy, and most of all he must get productivity rising.

"The government's productivity plan must be backed up with significant investment in skills, innovation and infrastructure. This is the only way to achieve sustainable pay growth when inflation rises again, and to ensure stable public finances."

"There is a good chance that we will see inflation turn negative again over the next couple of months. Inflation is likely to pick up from the latter part of this year, once the sizeable base effects caused by the collapse in oil prices begin to kick in.

"However, the absence of underlying inflationary pressures suggests that the headline rate will remain some way short of the 2% target in 2016.

"Consequently, we continue to expect the MPC to push back any decision to raise interest rates until well into next year."

Welcoming the news James Sproule, Chief Economist at the Institute of Directors, said:

"Businesses and households will cheer another month of low inflation, which is delivering an unexpected boost to millions of businesses and consumers. The lower cost of essentials, such as transport, has given companies more money to invest, take on staff, pay down debts, increase wages or reduce prices. At the same time, lower household food and petrol bills are feeding through to higher disposable incomes, increasing consumer confidence and demand.

"Given that job creation remains strong and wages are rising at their fastest pace for a number of years, Britain is in little danger of slipping into a period of entrenched deflation or 'noflation'. The new living wage, which comes into force over the next few years, could eventually feed through to higher prices and reduce margins for some employers, so businesses should make the most of low inflation while it is here."

"A spell of falling food and clothing prices won't solve the deep-seated problems in our economy.

"Many households are still struggling to pay the bills and have faced stagnating living standards.

"Productivity has been revised down next year and for three years after that. Now families and businesses need a genuine plan to boost output rather than simply a patching together of existing schemes."

Moving on outside the box