The UK economy saw the inflation rate remain at -0.1 percent in the year to October 2015 says the latest data from the Office for National Statistics (ONS).

The downward pressure on prices exerted by university tuition fees, food, alcohol and tobacco were offset by thew upward pressure from clothing and footwear as well as from a range of recreational good, said the ONS.

The unofficial measure of inflation that includes homeowner/occupier costs (CPIH) saw a rise of 0.2 percent in the year to October 2015. 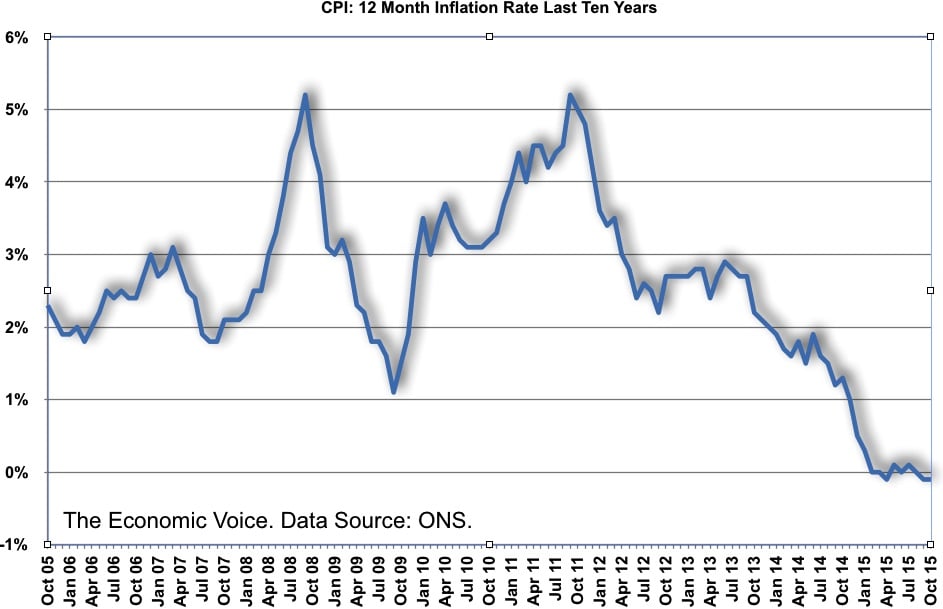 “The October outturn of -0.1% was in line with expectations. The unusual seasonal pattern in clothing prices continued, with September’s weakness being followed by a rebound in October. But this merely offset the downward pressures on inflation from the education component, with the impact of the 2012 increase in the cap on university tuition fees continuing to dissipate.

“October’s reading is likely to mark the low point for inflation, with the base effects associated with last year’s collapse in the oil price set to kick in from next month’s data. Indeed, these base effects are so strong that we could easily see a reading in the region of 0.5-0.6% as soon as December.

“In this context, it is no surprise that the MPC has become increasingly dovish of late. We are unlikely to see CPI inflation get back to 1% until the spring. We see this as an important landmark, with the MPC unlikely to actively consider raising interest rates until inflation has regained this level and the Governor has stopped having to write open letters to explain the persistent undershoots of the target. But even beyond that we think it will take some time for inflation to move back up towards the 2% target. Against such a benign backdrop, we expect the MPC to keep its powder dry until at least the second half of 2016.”

Hugh Nolan, Chief Actuary at JLT Employee Benefits, about the impact on pensions:

“Continued low inflation is bad news for final salary pension schemes as interest rates and gilt yields are likely to remain lower for longer. Trustees hoping for an increase in rates to help them eliminate deficits will either have to keep raiding the sponsoring employer for more and more cash or find new ways to fix the scheme funding level.

“Until inflation and interest rates get back to normal levels, employers will remain at risk of being forced under by unaffordable contributions and members will face the risk of losing benefits if schemes do go bust. The Pension Protection Fund (PPF) will make sure they still get some of their pension in such an event, but that amount is capped.

“Schemes with fixed levels of pension increases will be particularly badly affected, with some guaranteeing increases of 5% every year even during times of deflation.”

“Zero inflation is not the mark of a healthy economy. While downward pressure on prices may be providing some temporary relief for families, it is not a long-term fix.

“In order to have a lasting recovery that benefits everybody, we need urgent investment in skills, innovation and construction projects.

“Next week’s Comprehensive Spending Review is the perfect opportunity for the Chancellor to deliver a stronger recovery by launching an ambitious plan to build affordable homes and upgrade our ageing transport and energy networks.

“With interest rates at historic lows, there has never been a better time for the government to modernise the UK’s creaking infrastructure and focus on a secure and stable economy for the future.”

Ian Forrest, investment research analyst at The Share Centre, explains what the latest set of inflation figures mean for investors:

“There was no sign of any significant upward pressure on UK inflation today as the CPI measure remained in negative territory for a second consecutive month at -0.1%. The Office for National Statistics said that clothing and footwear provided the biggest upward pressure on inflation in September and October, with prices for outerwear rising 2% due mainly to fewer promotions during the period.

“The Consumer Prices Index fell by 0.1% in the year to October 2015, the same fall as in the year to September 2015. This means that, taken as a whole, households have experienced very little change in prices so far this year, compared with the same months in 2014.

“Investors should acknowledge that despite this being the weakest spell of inflation in more than 50 years, from November onwards, the market expects to see inflation rise as the impact of last year’s steep fall in the oil price begins to work its way out of official calculations.

“Added to the Bank of England’s recent dovish comments, these figures add to the underlying feeling that there will be no rush to raise interest rates until well into next year. For investors, this means that the case for long term investment in shares remains as strong as ever, with good returns relative to other asset classes."

“Today’s news confirming essentially flat prices is welcome for pensioners benefitting from the triple lock annual increase.  With average wages rising by about 2.5%, workers should also feel the benefits of their money going further this Christmas.  With inflation expected to remain zero-bound until Q2 2016, we do not expect the first rate hike until the second half of 2016.  Hence no need to lock into a fixed rate mortgage right now.”

“Low inflation continues to be the thorn in the side of the Bank of England, which now has another good reason to drag its feet on interest rates. We’re unlikely to see a rise in the base rate for some time now, forcing those reliant on their investment income to consider alternative investments. With significant volatility in financial markets, many investors are putting their money into property, unperturbed by the economic fallout the last time the property market overheated. All this uncertainty and low returns are a dangerous cocktail for investors, but diversification can mute many of the risks . The current environment will make the option of fixed interest secured business loans as provided by peer to peer platforms a viable way of diversifying an investment portfolio to improve returns and stability.”

“With inflation still in negative territory and the global outlook arguably deteriorating, there doesn’t appear to be any immediate pressure on the Bank of England to raise interest rates. But inflation could start to pick up fairly quickly next year as the impact of the falling oil price washes out of the numbers and if current levels of wage growth are sustained. Therefore rates lift-off is definitely on the horizon, but probably not until the second quarter of 2016.”

CBI chief warns against dangers of devolution by deadline