The latest Consumer Prices Index (CPI) annual inflation figures from the Office for National Statistics shows that the UK has dropped into the deflation zone. The annual rate of inflation was -0.1 percent in April 2015, down on the zero percent seen in March.

“This is the first time the CPI has fallen over the year since official records began in 1996 and the
first time since 1960 based on comparable historic estimates” says the ONS.

The biggest downward pressure has been attributed to transport services air and sea fares. The timing of Easter this year was also a contributing factor says the ONS.

The measure of inflation that includes homeowner occupier costs (CPIH) increased by 0.2 percent, down on march’s figure of 0.3 percent.

Using the old measure, the Retail Prices Index (RPI), inflation was 0.9 percent in April and using the updated version, RPIJ, it remained unchanged at 0.3 percent. 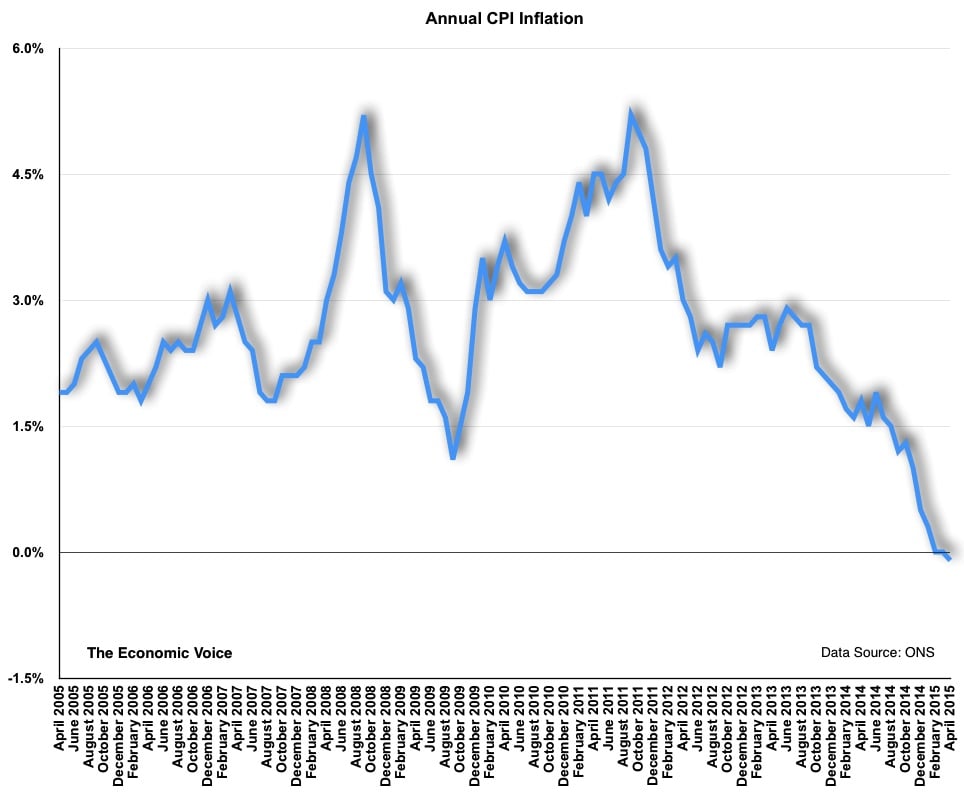 “Inflation turned negative in April with the lowest reading since the 1960s. But it’s unlikely we will see falling prices for a prolonged period, as the downward pressure on inflation from lower oil prices fades.
“Falling oil prices has been good news, boosting household incomes and lowering costs for businesses outside of the North Sea oil sector, which is being hit.

“With inflation set to remain below 1 per cent this year, a rise in interest rates anytime soon seems off the cards. Rates are likely to remain low into next year and beyond, continuing to help the domestic recovery.”

James Sproule, Chief Economist at the Institute of Directors said:

“The slip into deflation should not worry us, as it is primarily caused by a drop in the cost of energy, which is good news for households and businesses. Falling prices in necessities, such as food and transport, along with a period of sustained job creation and wage growth mean demand and consumption will remain buoyant.

“Deflation can be a chronic problem where it represents a lack of consumer confidence and an unwillingness to spend. This danger is very real in some parts of southern Europe, but is not even a distant threat in the UK. While deflation does cause the cost of debt to rise in real terms, the benefits to the wider economy of a period of falling prices far outweigh any downsides.”

“All the news is going George Osborne’s way, with the UK going into deflation for the first time for years. Interesting that it is the fall in fares that tipped it over, as coming up to the holiday season that could be seen as a bonus. It puts off interest rate changes even further and is likely to be seen as a boost, even if short lived. The Government is under pressure to come up with figures now as to where spending cuts will bite and how big projects like the NHS will be funded. Deflation is not a negative for all this.”

“Falling prices will certainly grab the headlines but this will be short-lived. Deflation isn’t setting in. Oil and petrol prices are rising and strong employment and real terms wage growth mean we’re likely to see inflation back in positive territory sooner rather than later.”

“Pensioners typically have a fixed income and have in recent years seen the value of their money eroded by low interest rates and inflation.  Today’s news of falling prices means macro-economics are now swinging in their favour as pensioners benefit disproportionately from falling prices.”

“CPI dipped below zero mainly due to the impact of lower oil prices on the energy sector and to sterling strength. This is unlikely to change the BoE’s view that falling prices is temporary although Service sector inflation declined from 2.4% to 2% which is a useful gauge of domestically generated inflation. This will allow the Bank time to look for signs of incipient wage pressure and may even allow rates to remain unchanged for longer than the market currently prices. Sterling may come under a little selling pressure near term, after the recent post-election bounce.”

“The UK economy can cope with a brief period of deflation, but longer term deflation would start to indicate slackness in the economy and require intervention from the Bank of England and the Government.  “However, the underlying strength of the labour market remains robust and data from IPSE’s quarterly Freelancer Confidence Index shows the majority of freelancers are optimistic about the economy’s future performance. We also know that average earnings for employees and freelancers continues to be ahead of inflation. The British public will appreciate the additional pounds in their pockets, and the one in ten self-employed people who often work abroad will welcome the lower costs of air travel.”

“These figures should not be a cause for concern for investors. Experts are confident that what we are witnessing is a period of short term negative inflation rather than a more damaging spiral of longer term deflation, when consumers start to defer purchases because they fear further falls in prices and wages. In fact, a temporary period of lower prices can boost consumer spending which will have a positive effect on UK economic growth.

“In the current scenario interest rates are not forecast to rise before the middle of 2016, meaning returns on cash savings are likely to main low. Savers therefore may consider equity funds if they are looking for an attractive level of income over the medium to longer term.

“Once the sharp fall in the oil price has worked its way through the system, inflation is expected to return to zero or even be slightly positive by May and then move towards the government’s 2 % inflation target over the next year or so. Equity investments remain a sensible option for many to protect from the long term effects of inflation on your savings.

“At present we are seeing lower fuel and food costs along with average wages starting to increase. The fact that these basic items are costing less means consumers may well have extra cash available. If you find you have a little more money left over at the end of the month why not review your long term goals and perhaps consider topping up your ISA if you have not yet used this year’s allowance.”

“Any relief for households is welcome, but this month’s figures reflect global trends and doesn’t change the reality that many are still struggling to pay the bills.

“The Government must clearly guard against the risk that business investment might be deferred. We need stronger action now to raise productivity to deliver sustainable growth and rising living standards.”

“The first period of negative inflation in over half a century could turn out to be the canary in the mine, signalling that there’s something very wrong with the recovery. And with the threat of deflation set to continue, the Chancellor’s plans for extreme cuts risk putting the economy into more serious trouble.

“We need a better plan for growth if we are going to have a recovery built to last with a firm foundation for improving living standards. Stagnating prices are not a sound foundation for the strong and sustained pay rises that workers have been waiting years for.”

“CPI inflation in April recorded its first negative reading since 1960, but this looks likely to be a one-off. Overall today’s reading may be an interesting piece of trivia, but it will have no tangible impact on the economic outlook beyond offering further evidence that UK consumers are enjoying a substantial boost to their spending power.

“The further fall from March’s 0% was largely a function of the volatile air & sea fares categories, where the movement of the Easter holidays from year-to-year typically causes unpredictable movements in the spring data. The services sector, where inflation has been relatively high recently, saw inflation drop most sharply, from 2.4% to 2%.

“Inflation is likely to remain in the 0-0.5% range until the latter months of this year, at which point sizeable base effects, caused by the collapse in oil prices, will begin to kick in and inflation will rise back above 1% again.

“We remain of the view that the MPC will sit on its hands until at least that point has been reached. But in terms of the broader monetary policy stance, the MPC is likely to have been influenced more by last week’s stronger than expected wage data than today’s figures.”