UK annual Consumer Price Index (CPI) inflation for July has come in at 2.6 percent, which is unchanged compared to the year to June.

The growth in the Consumer Prices Index including owner occupiers' housing costs (CPIH, which has now been designated as a national statistic (31st July 2017), was 2.6 percent for the year to July, once again unchanged from the month before.

"The price of motor fuel continued to fall and provided the largest downward contribution to change in the rate between June 2017 and July 2017. This was offset by smaller upward contributions from a range of goods and services, including clothing, household goods, gas and electricity, and food and non-alcoholic beverages." Said the Office for national Statistics (ONS). 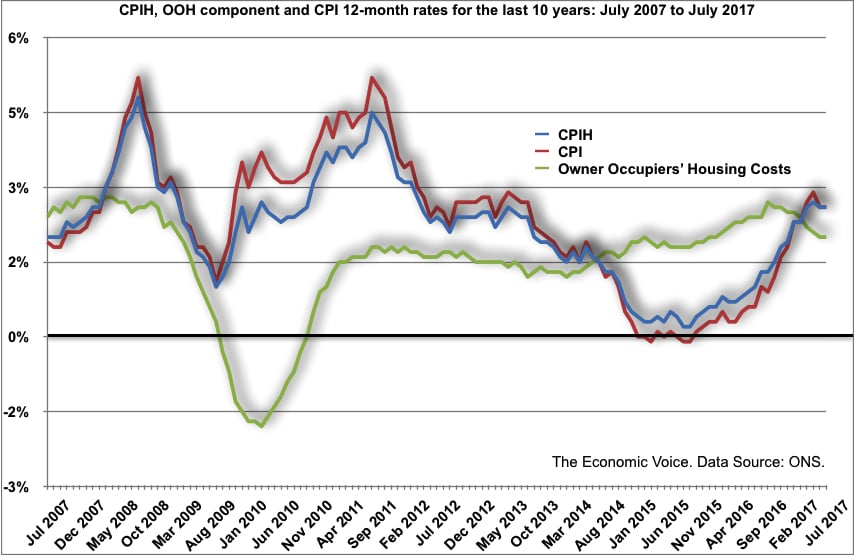 "July UK inflation was unchanged from June. The annual rate at 2.6% remains below its recent peak in May. There are some signs that the pressure on prices from sterling's depreciation has peaked. For instance, today's producer price release for July showed input prices increased by only 6.5% from a year ago compared with 9.9% in June. Nevertheless, we still expect inflation to rise further, potentially clearing 3% before year end. That means it is still on the cards that BoE Governor Carney will have to write a letter to the Chancellor explaining why inflation is above target."

"UK inflation appears to have stabilised over the summer months – at 2.6pc. The jury is still out, however, on whether it could still rise higher later this year, to around 3pc.

"The global pressures on UK inflation are easing, which is helping to limit the impact of a weakened pound. However, the UK continues to experience the highest inflation of the major western economies. Prices are up 2.6pc on a year ago in the UK compared with a range of 0.3-1.8 percent in other large European and North American economies.

"This is squeezing living standards and consumer spending, as wage growth is not keeping pace with the recent surge in inflation.

"The Bank of England may take comfort from the fact that inflation is not continuing to rise over the summer months. But there is still a strong case for starting to edge UK interest rates upwards from their exceptionally low level, following the lead taken by the United States Federal Reserve."

"Despite temporary dips, inflation continues on an upward path, adding to the pressure on incomes with basic pay expected to rise only by 1% over the next year. This makes saving more of a challenge across all ages, particularly with low interest rates providing little return, but inflation bites particularly hard for those already in retirement and living on fixed incomes. That said, a smart financial plan developed early on can help to cushion any financial shocks, even more so if this can identify methods to protect against inflation. Ensuring this is accounted for will allow far more flexibility, avoiding any mounting debt should the unexpected happen."

"The headline CPI print for July was somewhat weaker than expected at 2.6% – unchanged on the month as lower energy prices limited the increase over the period. CPI has probably not hit its peak, however a weak domestic backdrop suggests it will drop back soon after, with core service CPI supporting this thesis. From a monetary policy perspective, Sterling's fall post the release of the data is another indicator that the Bank of England is likely to sit on its hands over the next few months, with Brexit related uncertainty also starting to limit economic activity and underlying inflationary pressures."

"The ease with which equity markets have shrugged off last week's woes is reassuring, but also a little bit frightening. Reassuring in that it confirms there is a wave of liquidity willing and actively looking for buying opportunities on any dips. Frightening in that markets appear to be utterly invincible to any threat, despite potentially stretched valuations.

"It looked like the market was at a tipping point last week, but the robust rally over the past two days suggests that there are still plenty of investors who think otherwise. Trying to call the top of this market has been a fool's errand over the past few months and the weight of money supporting the market doesn't show any sign of abating."

"The income squeeze on cash-strapped UK consumers continues with July's inflation reading showing the CPI (Consumer Price Index) remaining at 2.6%.  The main drivers behind this month's food price inflation are a rise in the cost of bread and cereals, meat and fruit. However, this month the main focus will be on the RPI (Retail Prices Index) reading, as the July figure is used to determine by how much rail fares will increase in the new year. Commuters will face an eye-watering 3.6% increase in the cost of 'anytime' and season tickets in England and Wales in 2018, adding to mounting expenses.

"UK households continue to feel the squeeze as price rises continue to outpace earnings. Rising inflation coupled with dwindling wage growth means real wages are falling. In its August inflation report, the Bank of England pointed out that uncertainty over the economic outlook may be affecting companies' willingness to raise pay, projecting that regular pay growth will remain subdued over the rest of 2017.

"The Bank expects inflation to fall back towards the 2% target during 2018 as past increases in fuel prices drop out of the annual comparison, but this will mean very little if our earnings fail to keep up with price rises.

"Over the longer term, expect rising inflation to be a fleeting occurrence due to a number of economic trends. First, an aging population limits the size of the global workforce, which by corollary suppresses economic activity. Meanwhile rising inequality and the growing cohort of self-employed people with limited earning power, such as Uber drivers in the 'gig economy', means less money is being spent.

"Less economic activity, and less money spent, means prices are unlikely to be driven upwards, keeping a lid on inflation over the long term.

"If inflation stays low and economic growth remains tepid, there is no reason for the Bank of England to risk the economic recovery by putting up interest rates any time soon. Good news for borrowers, bad news for savers and retirees and even more reason to turn your attention to the stock market and experienced stock pickers who can roll up their sleeves and use the resources and insight at their disposal to unlock those ever elusive returns."

"Britain's cost of living crisis is not easing up. The squeeze on cash-strapped families continues to grip.

"Rising prices are hammering pay packets. And today's announcement on rail fare hikes will only add to the pressure households are under.

"The government needs to wake up and get wages rising across the public and private sector. The clock is ticking."

"This Government is caught like a rabbit in the economic headlights, paralysed and without a credible plan about what to do. The inflation rate might be holding steady but the cost of living keeps rising, wages are stagnating and the threat of Brexit continues to make things far worse.

"People are struggling to feed their families and pay their rent, but the Government keeps pushing ahead with its scattergun approach. Its blind allegiance to credit fuelled and largely illusory growth will do little to raise living standards and a lot to exacerbate the very problems it should be addressing.

"The Green Party is the only party talking about making the right choices and bringing about the shift in power and sustainable, transitioned economy we urgently need. Workers and small business should be empowered and we must embrace bold new ideas like a universal basic income, which would provide security and opportunity, and a shorter working week, to redress the imbalance in our economy."