The EY ITEM club comments on today's inflation figures from the ONS:

· Squeeze on consumers tightened further in August as consumer price inflation rose to 2.9% from 2.6% in July and June. Likely to have been appreciably above earnings growth which currently remains just above 2%.

· Inflation lifted in August by higher petrol prices and by higher prices for clothing and footwear.

· A move back up in producer output and input prices in August points to the recent slippage in sterling having some renewed upward impact on inflation.

· Inflation now looks likely to move just above 3% in the near-term, but there remains a good chance that this will be the peak barring sustained renewed sterling weakness.

· With sterling’s past drop largely worked through, earnings growth remaining soft and oil prices relatively low, inflation still looks likely to fall back markedly as 2018 progresses. We see inflation back to 2% by the end of next year. 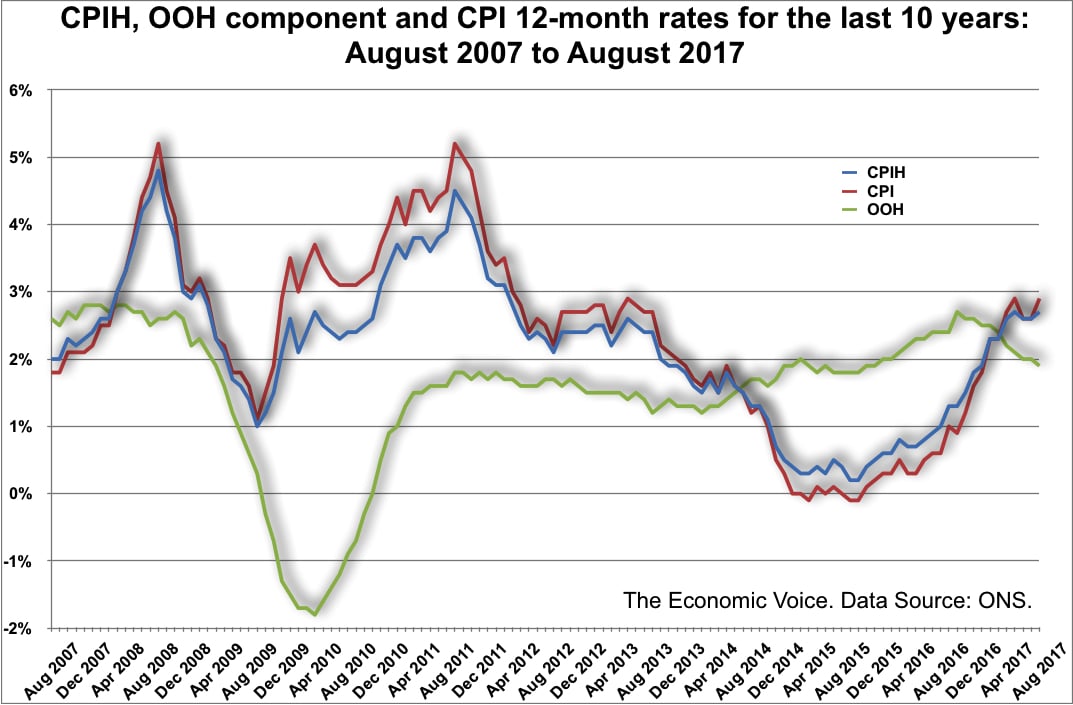 · It still looks much more likely than not that the Bank of England will keep interest rates at 0.25% on Thursday after the September MPC meeting. However, August’s rise in inflation to 2.9% will not go down well with the Bank of England and it increases the likelihood that the MPC will adopt a more hawkish tone. We had been expecting a 7-2 vote for unchanged interest rates but August’s inflation data increases the possibility of a tighter vote.

· The MPC will likely warn on Thursday that any sustained sterling weakness will increase inflation risks and could prompt an interest rate hike sooner rather than later. The MPC may also well warn once again that interest rates are likely to rise earlier and a little faster than markets currently expect – and indicate that businesses and consumers need to take this possibility on board.

· We still lean towards the view that the Bank of England will hold off from raising interest rates until late-2018 – but a move before then is starting to look a closer call. Our expectation that a hike will be delayed until late-2018 is based on our belief that the economy is likely to remain stuck in low gear, inflation is likely to ease back steadily after peaking around 3% in the latter months of 2017 and Brexit uncertainties will remain high.

“The squeeze on consumers intensified in August as consumer price inflation (CPI) climbed to 2.9% from 2.6% in both July and June. This matched May’s level which was the joint highest since April 2012.

“Inflation was lifted in August by a renewed rise in petrol prices after they had fallen back over the previous five months. There was also a marked upward impact from clothing prices.

“August’s producer price data also showed a move back up, which likely reflected the recent renewed slippage in sterling. Producer output prices rose 0.4 % month-on-month (m/m), causing the year-on-year (y/y) increase to rise back up to 3.4% after moderating to 3.2% in July from 3.6% in May.

Inflation likely to edge above 3% in latter months of 2017

“The recent slippage in sterling has increased the likelihood that inflation will hit just above 3% in the latter months of 2017. However, we believe this should be around the peak as long as sterling does not suffer further weakness.

“Consequently, we believe there is a strong chance that CPI will be back to 2% by the end of 2018.”

“Inflation rising back up to 2.9% in August very much keeps the squeeze on consumers as it highly likely marked another month of negative real income growth. The latest data shows that total weekly average earnings growth was 2.1% in the three months to June, while regular earnings growth was also 2.1%. This meant that real incomes fell by 0.5% in June.

Reaction by Taxand to tax evasion speech in Davos

How to Fix a Company in Financial Crisis