The Bank of England Monetary Policy Committee (MPC) today voted by a six to two majority to maintain the bank rate at 0.25 percent.

The committee went on to vote unanimously on agreeing to close the drawdown period for the Term Funding Scheme (TFS) on 28 February 2018, as planned.

The concerning news for the markets is that the central bank has cut its growth forecast for the UK economy from 1.9 percent to 1.7 percent.

All this combined to cause the pound to slump on the news. 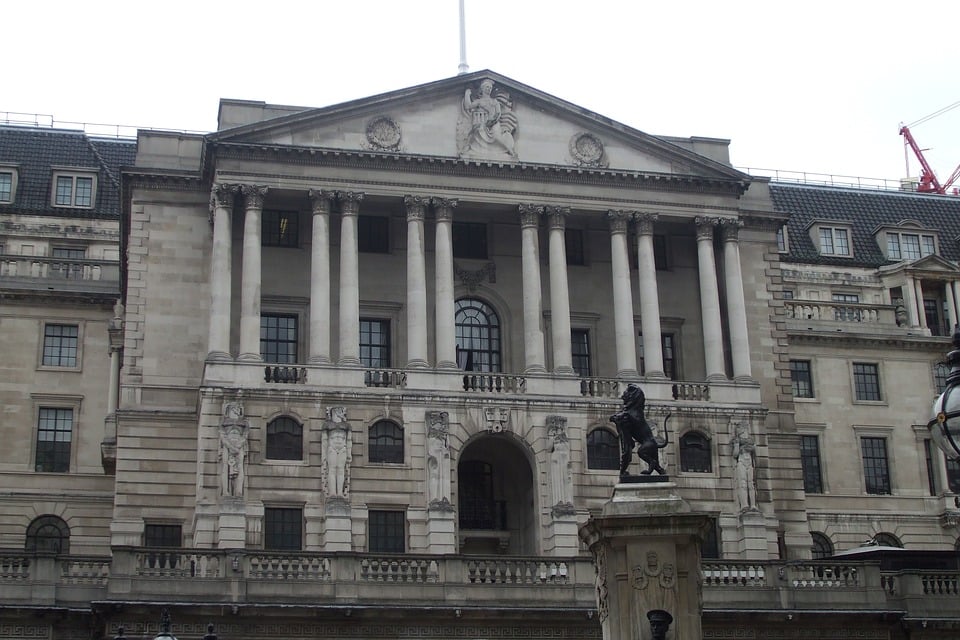 "Today's downgraded growth forecast from the Bank of England is yet another example highlighting the failed economic policies of this downgraded Tory government.  "These figures also come on the back other downgrades to forecasts for productivity and wages that continue to not keep up with prices, and represent the last seven years of Tory economic failure hitting working people's living standards.  "There is no hiding from the truth. The Tories' failed austerity agenda is holding Britain back and is a threat to working households.

"Only a Labour Government with a proper plan for investment, underpinned by our Fiscal Credibility Rule will deliver the high-wage, high-skill economy that works for the many not the few."

"As expected, the Bank of England left interest rates unchanged with two dissenters in the committee voting for a rate hike. The central bank cut its GDP forecast as uncertainty created by Brexit hits output, despite the boost from the weaker currency and the upturn in global growth.

"The central bank's forecast is that the UK will exit the EU smoothly, despite some indications that the Government's position is currently not clear. Given the relatively tight labour market and weak productivity growth, the central bank continues to assume that the output gap will be closed within three years even though Brexit continues to be the elephant in the room."

"In each of the last three months during her tenure as a member of the Bank of England's Monetary Policy Committee, Kristine Forbes voted for higher interest rates, and in her last meeting she was joined by two others: Ian McCafferty and Michael Saunders. Ms Forbes has now stepped down from the committee, replaced by Silvana Tenreyro.  Today, Mr Tenreyro appeared to side with the doves, voting for rates to say on hold, with only Messrs McCafferty and Saunders voting for a hike.

"Despite plenty of warnings to the contrary, inflation just doesn't seem to want to pose a threat. It has recently fallen sharply in the US and Euro area, and only Brexit related falls in the pound have kept UK inflation above the Bank of England's 2% target. The odds of an increase in rates this year appear to be receding.

"However, today's inflation report warned that much weaker business investment than expected is likely to have an adverse effect, eventually. Indeed, the bank's governor, Mark Carney, warned that by 2020, the level of business investment is likely to be some 20% less than forecast at the time of the referendum. As a result, the bank warned that slack in the economy is likely to be less than expected and even modest growth could be enough to eliminate slack altogether, creating the imperative for higher interest rates.

"Although the bank expects business investment and exports to lift growth soon – and indeed the latest purchasing managers indexes lend evidence that this has started to happen – it looks as if potential growth in the short and medium term will be on the low side.

"But, as a result of lack of slack, interest rates may rise next year, don't expect big increases, global forces are such that inflation pressures, even in the UK, with limited headroom for growth, are likely to be limited."

Tim Graf comments, "The downside surprise in June inflation figures looks a pivotal event in today's outcome, with a rate hike now looking unlikely for the remainder of this year, probably much longer. Indeed, our gauges of online retail inflation1, showing sharp deterioration in annual inflation rates, suggest the MPC can afford to wait and see if political uncertainty takes any further toll on already softening growth and inflation data."

Alan Wilson comments, "The BoE continues to walk the policy tightrope, balancing transitory inflation pressure against concerns Brexit uncertainty will eventually curtail domestic growth.  Today, all eyes were on Super Thursday; would there be an intensification of the hawkish signalling we have seen over recent weeks?  From today's release, it is clear hawkish discontent has been somewhat tempered – weaker than expected growth, wage and consumer data since June's meeting has given likeminded committee hawks food for thought.  While speculation had grown that there could be further dissenting voters at August's meeting – with BoE Chief Economist, Andrew Haldane and Governor, Mark Carney the obvious candidates – the hawks in waiting failed to bare their talons.  Looking forward, the MPC will maintain its hawkish bias to encourage the market to dampen inflation expectations on its behalf.  It is very unlikely this signalling will culminate in formal policy action, particularly in the early stages of the Brexit process.  Learning lessons from the European Central Bank (ECB), the MPC will continue to tread lightly and resist the temptation of tightening amid transitory inflation pressure."

"The Bank of England's decision to hold interest rates has direct implications for every household, positive and negative. For existing homeowners, sustained low interest rates are good news because they keep mortgage repayments level. In this situation, we'd recommend borrowers review their mortgage to check if they're on the right deal, should switch to a more competitive fixed rate deal, or even begin making overpayments to bring down their overall debt burden.

"Taking the time to review your mortgage is essential, especially as an estimated two million mortgage borrowers in the UK are on Standard Variable Rates, overpaying an average of £4,900 per year compared to a market leading deal. For those saving for a deposit, sustained low interest rates are bad news since their savings will continue to grow slowly. The glimmer of hope, particularly for first time buyers, is that housing prices have begun to slow making some areas that were previously unaffordable more accessible."

"The weakening outlook for growth, and gloomy forecast for wages, are a big worry for workers whose living standards are already falling.

"Families will welcome the decision to hold rates. But while caution from the Bank is sensible, the government needs to be much bolder in its approach to getting wages rising.

"With businesses reluctant to invest, the government must step up to the plate with a plan to boost investment, and to get wages rising again. They should start by scrapping the unfair pay restrictions on public servants that are leaving them thousands of pounds worth off. And they must boost the minimum wage to £10 as soon as possible."

All change as reality sets in

Of course Corbyn is leading – he's the only one with the charm and vision, says Labour leadership expert