Positive Money – the research body campaigning for a better financial system in the UK – today warns that the UK is ‘sleepwalking’ into the same debt trap that caused the recent financial crisis.

Despite Chancellor George Osborne’s mantra that Britain must “pay down its debts”, the UK’s current economic recovery has relied almost entirely on increased consumer borrowing, rather than productive growth in the real economy. The truth is that UK consumer debt is now at an all-time high – more than £1.4 trillion, a figure which is only slightly less than the UK’s entire annual economic output.

Millions of British families now owe more on mortgages, credit cards and personal loans than at any other time in history. This equates to an average debt of £54,000 per household. People across the UK are already struggling to cope with rising costs of living, and with interest rates likely to rise in the future, an ‘economic time-bomb’ is ticking.

The great irony of this situation is that the financial crisis was fuelled by excessive lending by banks, yet the economic growth that politicians are now taking credit for is fuelled by further rises in household debt. This makes the UK’s current recovery frail, unsustainable and likely to create an even bigger financial crisis in future. Common sense would warn against dealing with a debt crisis by encouraging people to take on even more debt. Lord Turner, the former head of the Financial Services Authority, has described it as a "hair of the dog that bit us" strategy for getting the economy going again. 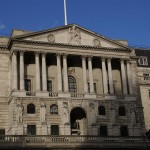 Since the crisis politicians parroted the urgent need to "get banks lending again", as if lending was the solution to the crisis rather than the cause of it. The Government launched ‘Funding for Lending’ and more recently the ‘Help to Buy’ scheme to encourage increased bank lending. But in the current economic system, where banks create most of the nation's money by making loans, there are in fact few other options. We depend on banks to create most of the nation's money, so if we want more money in the economy, we apparently have to go further into debt to the banks.

Compounding the issue is the fact that if the public, as the Prime Minister briefly advocated last year, tries its best to pay off its personal debts, we actually end up taking money out of the economy. This is because every mortgage or loan repaid to a bank actually withdraws money from the UK economy. If the money that is being destroyed is not replaced by new lending, the economy will shrink.

So the Government has chosen to encourage people to borrow more. Spending goes up, fuelled by newly created money, and the economy ‘recovers’. But when personal debt is at its all-time peak -around 20% higher than the Government's own debts – adding more debt to the pile is simply laying the foundations for the next financial crisis.

“Sadly, the way that our current financial system works – where almost all of the money in the economy is created by the banks lending – causes economic instability, the endless cycle of boom and bust, and a society where the rich get richer and the poor get poorer. The reality of this situation is beginning to dawn on more people; from senior bankers to think-tanks, economists to members of the House of Lords.

“The good news is that there are ways to break the connection between money and debt. Positive Money has been working hard for a number of years to investigate and analyse these. One idea is to use the Bank of England to create money electronically, and put money into the economy through controlled Government spending, tax rebates or simply through a "citizen's dividend" for every adult. This would boost the amount of money in the economy, but without requiring anyone to borrow more.

“It's an idea that has been described as ‘QE for the People’. Traditional Quantitative Easing failed to boost the real economy, flooding financial markets with newly-created money and – by driving up the stock market – gave a huge financial benefit to the wealthiest 5% of households, who own 40% of financial assets. In contrast, this alternative approach would get money into the real economy, onto the high street, and would create jobs outside of financial services and estate agencies. As Lord Turner described earlier this year, although the suggestion that the state should be allowed to create money has been treated as a taboo by economists, if done right it might be the most effective way of stimulating the economy without a further dangerous increase in household debt.

“As long as the UK relies on its banks to create the money on which the UK economy runs, and these banks are left free to put this newly created money into property bubbles and financial markets, then the country is stuck with rising personal debt and unaffordable housing. These are the very ingredients of the last financial crisis which brought banks to their knees, required massive taxpayer bailouts and nearly destroyed our financial system.

“By fuelling our economic recovery with rising personal and mortgage debt, we risk repeating the disastrous mistakes of the past."