Between the fourth quarter of 2016 and the first quarter of 2017, UK labour productivity, as measured by output per hour, is estimated to have fallen buy 0.5 percent.

The data from the Office for National Statistics (ONS) also shows that unit labour cost (ULC) grew by 2.1 percent in the year to Q1 2017.

The graph below shows productivity in terms of output per hour and output per worker since 1994, with trend line post the economic crash. As can be seen from the graph, productivity fell after the most recent economic downturn, which is normal but, unlike previous recovery periods, productivity has failed to pick up and has remained stubbornly level. This is usually referred to as the ‘productivity puzzle’. We would normally expect to see a rebound in productivity. 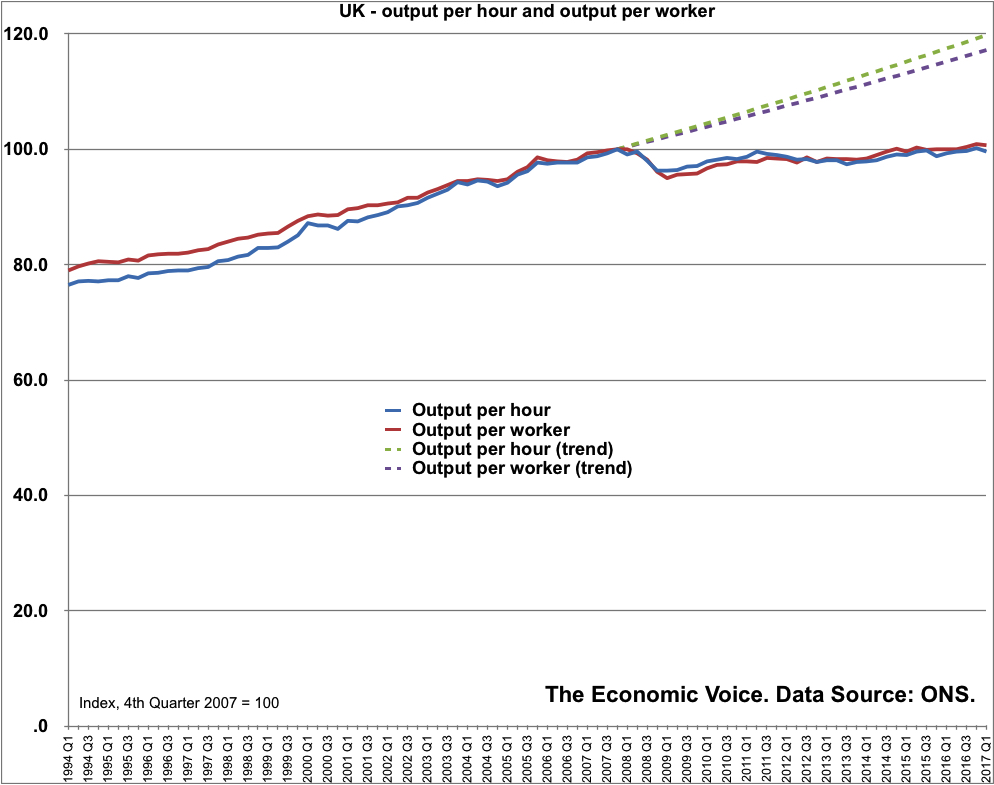 “It’s alarming, but perhaps given the current political backdrop of Brexit and weak leadership, that the UK’s recent trend of productivity growth has ended.

“Action needs to be taken before this becomes a downward trend. Investment in skills and management training is a crucial step to boosting productivity.

“Poor management is costing our economy £84bn each year, and Britain lags other countries when it comes to people skills. Indeed, four out of five British bosses are 'accidental managers' who've never been trained. Investing in apprenticeships to boost management talent, as well as technical skills, is a vital part of building a globally competitive UK plc.

“We need better home-grown leaders, and more of them, to close the productivity gap and investing in management apprenticeships will provide school leavers and existing workers alike with the hands-on, practical experience needed to gain those management and leadership capabilities.”

“This should set off alarm bells in government. It confirms that we are nowhere near solving the UK’s productivity puzzle, which is holding back our economy and people’s living standards.

“Productivity fell following the financial crisis and has grown slowly since then, only returning to its pre-crisis level last year. After that fragile recovery, it looks like we are going backwards again.

“Without improvements in how much we all produce, workers will not earn more and we will be stuck in a world of stagnant or even falling wages.

“Productivity was sadly absent from the election debate, but we can’t ignore it any longer. Instead of being distracted by Brexit, we need to remain inside the Single Market while addressing the skills deficit and lack of investment that are the real cause of our problems.”

"Today's figures showing productivity falling and the service sector weakening only further highlight the economic failure of the Tories these past seven years.

"When Philip Hammond became Chancellor he made productivity one of his central policy aims but what we see today is that it is going backwards on his watch. And if anything, he has made matter worse by continuing with the failed policy of austerity.

"Not content with cutting public sector workers' pay, the government's failure to invest in the British economy means private sector wages continue to stagnate thanks to weak productivity, making the Chancellor's boasts about the economy look increasingly laughable.

"Only Labour has a serious plan to tackle the productivity crisis and equip our economy for the challenges of the future. And if the Tories are more concerned with arguing amongst themselves than acting in the interest of our country, then they should step aside and let a Labour government lead the way."

“These figures must act as a stark wake up call to UK enterprises and companies with significant UK operations; the sector needs do more to avoid a cross sector downturn. Enterprise decision makers have to recognise that productivity, collaboration and organisational growth can be achieved via an investment in their employees.

Spending allocated towards employee wellbeing and engagement has been proven to increase productivity, reduce attrition and improve overall employee satisfaction – all factors of increasing importance in these turbulent times

Enterprises that are not immediately considering employee productivity tools are prolonging economic unpredictability.”

Crossrail To Handle A Quarter Of A Billion Visitors By 2026

Are Prospects for UK Exports in the Eurozone Improving?