Nearly half of people (44%) in Europe plan to begin 2016 with a financial goal, but in the UK, money resolutions may not be a priority.

The ING Special Report on Christmas and New Year, which surveyed almost 15,000 people across 15 countries, reveals that only one in four people in the UK (27%) are set to make a financial resolution in 2016 – with Germany (30%) and Austria (35%) following the UK in shunning financial goals.

Interestingly though, while these three countries have the fewest people planning a money-focused resolution, those who do make one are among the most successful at sticking to their pledge. Those in Austria (68%), Germany (68%), and the UK (65%) score far higher than the average across Europe (52%).

In addition to showing a lack of interest in financial resolutions, generous UK consumers are actually likely to spend more on Christmas gifts than any other European nation. Furthermore, with 15 per cent willing to pay for the entire festivities on credit, UK shoppers are among the most likely to get into debt, only just behind those in Romania (16%).

Favourable conditions for UK consumers and optimism in the economy may have led to fewer resolutions around saving or reducing debt, with potentially fewer Brits feeling under pressure due to low inflation and increasing wages.

For those making financial New Year’s resolutions, ‘saving more’ is the highest priority across the continent (41%), despite low interest rates, compared to reducing debt (27%) or controlling spending (27%), while five per cent have other key goals such as opening a business or buying a home.

“European economies have been in the spotlight throughout 2015, so it’s interesting to see how consumers are reflecting on their own finances going into next year. We’ll have to wait and see whether the UK’s attitude to financial resolutions and spending in the survey should be seen as a broader economic indicator, or whether Europe’s cautious approach is more sensible.” 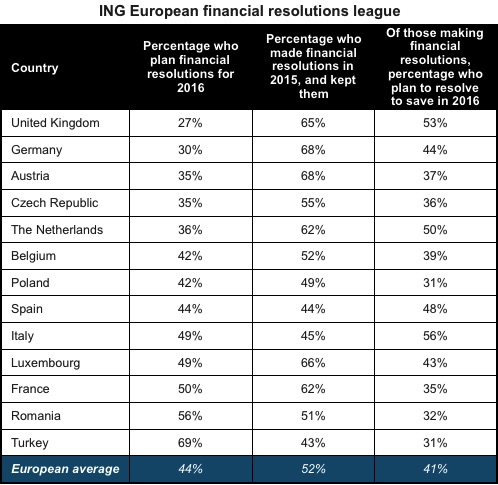