A leading index indicates that manufacturing growth in the UK, despite still being in positive territory, has slowed below expectations as new export orders have fallen at the fastest rate since May 2009.

The key points from the Markit/CIPS UK Manufacturing PMIÂ® are that the UK Manufacturing PMI still shows growth for the fifth consecutive month, weaker overseas demand has led to reduced new export orders so output growth has slowed and factory gate price inflation is at its highest for seven months.

April’s seasonally adjusted Markit/CIPS UK Manufacturing Purchasing Managers’ IndexÂ® (PMIÂ®) fell from 51.9 in March to 50.5 in April. Anything above 50 indicates growth and below 50 indicates contraction. The general consensus had been for only a slight drop to 51.5

Commenting on these figures Nida Ali, economic advisor to the Ernst & Young ITEM Club, said “Although continued expansion in the manufacturing sector provides a small crumb of comfort, a number of factors in today’s PMI figures clearly point to underlying weakness.

“With little prospect of a pick-up in export demand from Europe, the fall in export orders from non-EU countries is a worrying development. Moreover, the increase in output was largely supported by a decline in the backlog of work, a trend which is unsustainable and suggests that growth in the sector will probably slow in the coming months. 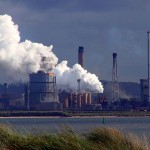 “However, a recent CBI survey reported strong trends for manufacturing across the board, so the PMI results are quite surprising. These mixed signals make it very difficult to accurately judge the implications for overall growth. But, on the face of it, these figures don't bode well for GDP in Q2. The extra Bank holiday in June is already likely to be a drag on growth and weak output in the rest of the quarter would compound this further.”

But just to reiterate, however weak this may look it is still growth for the last five months, however small.

The Markit/CIPS data for the UK Manufacturing PMI is based on information from monthly questionnaire replies by purchasing executives of 600 industrial companies.