Although the seasonally adjusted Markit/CIPS Purchasing Manager's Index® (PMI®) for January 2014 came in at 56.7, slightly lower than December's 57.2, it is still higher the series average of 51.3. It is still well into the positive territory above the neutral '50'.

Markit/CIPS reported that the strong manufacturing production performance was maintained into January 2014 as companies responded to new orders and demand from the domestic market and from overseas.

'The latest expansion in new export orders was broad-based by source, with UK manufacturers mentioning improved demand from North America, mainland Europe, Asia, Brazil, Scandinavia and the Middle-East. Moreover, the ongoing improvement in global market conditions drove the rate of increase in new export business to a near three-year record' said Markit/CIPS.

As a result there has also been further job creation as employment increased for the ninth month in succession remaining near to November's two and a half year high. There was also a broad based rise in payroll numbers said Markit/CIPS.

"UK manufacturing made a strong start to the new year, continuing the robust upsurge in production seen at the tail end of 2013. Although the pace of output expansion has cooled slightly in recent months, growth is still tracking at one of the highest rates in the 22-year survey history. The broad base of the upturn is remarkable, with its benefits being felt across all product categories and at SMEs and large-scale producers alike."

"The continued improvement in global market conditions has ushered in a broad based and fully fledged recovery in manufacturing. Sustaining growth close to November's near record numbers, the makers' march continued in January 2014, embodied by ever faster rates of new business growth and ongoing increases in employment levels." 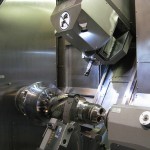 "Today's manufacturing survey has provided an upbeat start to 2014. The manufacturing sector expanded by 0.8% in the final quarter of 2013 and the latest PMI data suggests that its strength is holding up.

"There is encouraging evidence that the recovery is broadening out, with export orders robust and diminishing spare capacity opening up the possibility of stronger investment. Though last week's lending data was again disappointing, many larger firms have substantial cash piles at their disposal so are in a strong position to start ramping up investment to keep pace with growing demand – both at home and abroad.

"It's good news for the consumer recovery that firms continue to soak up labour; higher levels of employment provide a direct boost to household incomes and could also generate stronger earnings growth if firms start to come up against skills shortages. It also adds to the chances of unemployment falling below 7% in the next month or two."