Twenty-plus years on, the collapse of the USSR in 1991 threatened massive Western defense budgets, bereft of a major enemy like the “Evil Empire.”

Western militaries conveniently found a new global enemy a decade later following the terrorist attacks on 11 September 2001, and since then, they have struggled in the light of invasions of Iraq and Afghanistan to adapt their strategies to cope with the new threat, making defending the “homeland” the highest priority.

While the U.S. created the “Department of Homeland Security,” Washington’s less prosperous European allies have been forced to seek solutions to indigenous defense largely by themselves beyond NATO.

Except that the NATO charter Chapter 5 stipulates that an attack upon a member state will be met by the entire coalition.

European democracies have scrambled to define both national and European Union security issues, particularly since the global economic downturn, which began in 2008, forcing hard choices amongst European defense ministries.

Furthermore, many European nations now have significant post-colonial immigration populations, ramping up security concerns, from both indigenous citizens and ongoing concerns of foreign aggression. Defending the United Kingdom’s territorial, maritime and aerial space is the primary mission of Britain’s Ministry of Defense.

A laudable objective, but, in a time of declining MOD revenues amid energy imports, perhaps, a wind farm too far?

Needless to say, security encompasses protecting the country access to energy, so anything that reduces the kingdom’s dependency on foreign energy imports must be a good thing, correct?

The latest threat to Britain?

The MOD has come out against two proposed 115 foot wind power towers in Cornwall, which they assert are so big they could look like planes on monitoring equipment.

The MOD assert that the wind towers green energy devices could confuse computer systems designed to protect the UK andÂ identify the turbines as a threatÂ , triggering the MOD to send in fighter aircraft to investigate, and while the RAF was preoccupied, allowing real enemies to sneak into British airspace, and accordingly, are against their construction.

The unpatriotic British citizens attempting to undermine British aerial defense are Richard and Ian Lobb, who want to install the 50 kilowatt towers on their adjacent farms in St Ewe, Cornwall. The ever vigilant MOD which warned the installation would cause "unacceptable interference" to an air traffic control radar 30 miles away in Wembury, Devon.

According to the MOD, "Wind turbines have been shown to have detrimental effects on the performance of MoD ATC radars. These effects include the desensitisation of radar in the vicinity of the turbines, and the creation of 'false' aircraft returns which air traffic controllers must treat as real. The desensitisation of radar could result in aircraft not being detected by the radar and therefore not presented to air traffic controllers. The creation of 'false' aircraft display on the radar leads to increased workload for both controllers and aircrews and may have a significant operati onal impact. Furthermore, real aircraft returns can be obscured by the turbine's radar returns, making the tracking of conflicting, unknown aircraft much more difficult."

A tad of history and geography here. 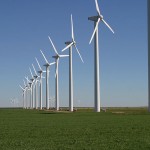 Radar installations along the English Channel were crucial in Britain winning the crucial Battle of Britain in 1940 against Hitler’s Luftwaffe, so Britain’s RAF is hardly unfamiliar with the principles of radar, more than seventy years later.

Secondly, how does a stationary object generate a hostile radar signature, unlike an incoming aircraft moving at hundreds of miles per hour?

Thirdly, virtually all of the RAF’s interception missions during the Cold War and after were against Soviet, and now Russian military aircraft approaching from the northeast, across the North Sea.

Cornwall, in Britain’s extreme southwest, is geographically rather distant from this area.

So, who’s to send the threats?

The people of Cornwall deserve their green energy, and the MOD officials should be chastised for their ramping up of a non-existent problem.

The Armada was over four centuries ago, World War Two over 70 years ago – the people of Cornwall deserve electricity from renewable energy sources, as it hardly seems to be a threat to national security beyond those MOD boffins who have apparently spent too much time at the pub over lunch hour.

Advertised vacancies outstrip jobseekers for first time since the recession