Ahead of the 2016 UK Budget on the 16 March, Azad Zangana, Senior European Economist, looks at how the UK Chancellor of the Exchequer, George Osborne, might consider plugging a near £20 billion black hole in public finances:

The UK’s public sector net borrowing numbers are currently on track to end the fiscal year almost £10 billion worse than the Office for Budgetary Responsibility (OBR) had forecast back in November. Part of the reason behind the miss is the delay in implementing reforms of in-work benefits, along with the cancellation of the sale of publically held banking shares due to poor market conditions.

Why should this matter? After all, UK Chancellor of the Exchequer, Osborne, has a poor record of meeting fiscal targets. After winning the last general election, the government legislated to introduce new fiscal rules designed to stop the ever greening of austerity. Typically, there are three rules: 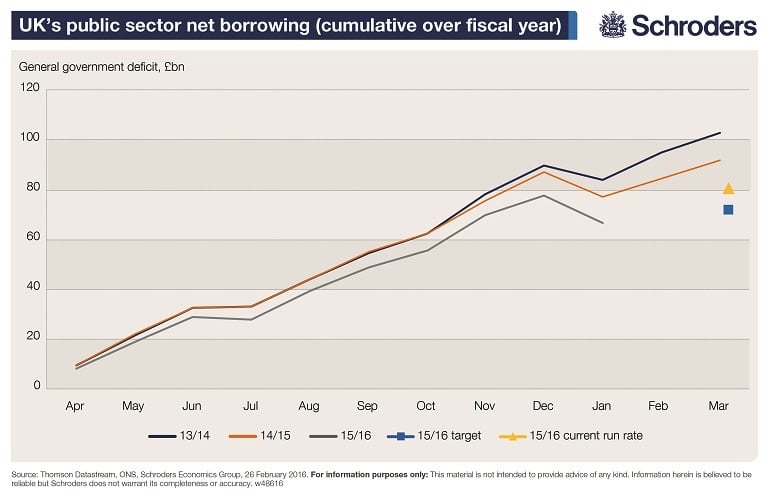 In addition to this year’s £10 billion miss, there is another £10 billion missing from the chancellor’s plans. The OBR’s forecast for tax revenues is likely to be around £1.5-£2 billion lower from lower capital tax receipts, due to the fall in UK equity markets since November. In addition, current fiscal plans to not have provisions for the promised cuts in personal taxes including the raising of the personal allowance, and the lowering of the higher rate tax threshold – expected to cost the exchequer around £8 billion by 2019/20.

So with around a £20 billion black-hole in the public finances and a softening economic outlook, the chancellor’s decision to blow a £27 billion windfall just four months ago by reducing austerity plans now look unsustainable. Indeed, speaking from the latest G20 meeting last week, he admitted that he will be forced to announce fresh spending cuts.

The chancellor will be looking for additional sources of revenue, especially as the government’s tax triple-lock legally rules out increases in income tax, national insurance contributions and VAT.