Comparing September this year with September 2014 borrowing was down £1.6 billion.

However, when looking at the total accumulated debt pile public sector net debt (excluding public sector banks) stood at £1,524.1 billion in September 2015, an increase of £70.5 billion on the same time last year. This represents 80.6 percent of GDP.Using the EU measure of General Government Gross Debt the figures were a total of £1,638.2 billion, an increase of £78.8 billion on last year, which equates to 86.3 percent of GDP. 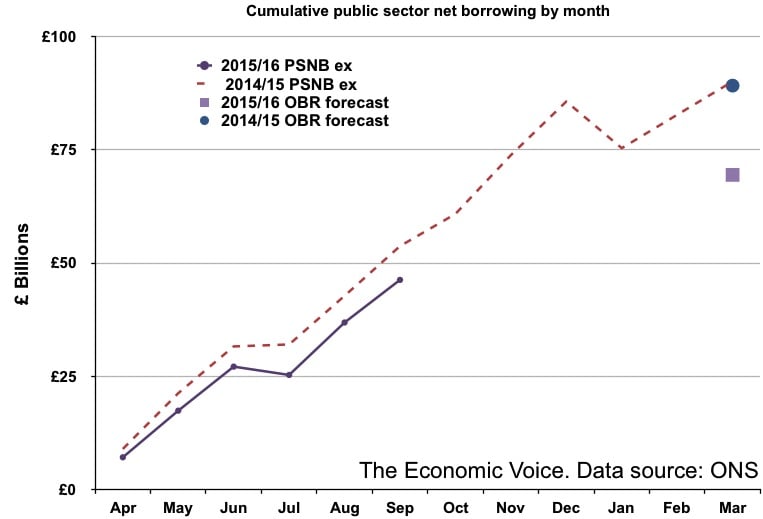 "Public sector borrowing of £9.4bn in September was below the £10.1bn predicted by the consensus forecast and a significant undershoot on the £11bn recorded in the same month a year earlier. In fact, this was the smallest September deficit since 2007.

"September's drop in borrowing reflected a 3.9% annual rise in central government receipts. All of the major tax streams saw decent gains. Income tax revenues rose by 4.1% year-on-year and VAT receipts were up by 5.1%. The star performer was corporation tax, with revenues surging at an annual rate of 8.5%.

"Meanwhile, central government spending in September rose by a modest 1.2%, the weakest rate in five months.

"September's deficit takes borrowing in the first six months of the fiscal year to £46.3bn –  £7.5bn lower than the deficit recoded in the same period in 2014/15. But this 14% drop is still well below the 22.8% fall that the OBR predicted for the fiscal year as a whole in July's Budget. The OBR's borrowing forecast of £69.5bn for 2015/16 would require monthly borrowing over the period from October 2015 to March 2016 to average £4bn, almost a third lower than the same period a year earlier. But with recent signs of a cooling in economic activity likely to make its presence felt in the fiscal data over the next few months, such a fall in borrowing looks unlikely.

"The OBR may use the Autumn Statement on 25 November to revise up its borrowing forecast for 2015/16 to perhaps £76bn. This would still be lower than the previous fiscal year, but once again emphasises the slow process that deficit reduction is proving to be."

"The Chancellor is borrowing at four times the rate he planned to this year, because his deficit reduction strategy has failed. Instead of clearing the deficit, severe public spending cuts have slowed down the recovery and held back wage growth, leaving income tax revenues and national insurance receipts much lower than expected.

"The Chancellor is in danger of repeating the mistakes of the last parliament with further public spending cuts that put the recovery at risk. This would damage the tax base and leave the public finances in a mess for even longer."