In good news for the government, the latest public sector finance figures from the Office for National Statistics (ONS) shows a surplus in July of £1.3 billion, the first July surplus since 2012.

In the year to date (from April 2015 to July 2015) public sector net borrowing (excluding public sector banks) decreased by £7.3 billion to £24 billion compared to the same period last year, which equates to 1.3 percent of Gross Domestic Product (GDP). 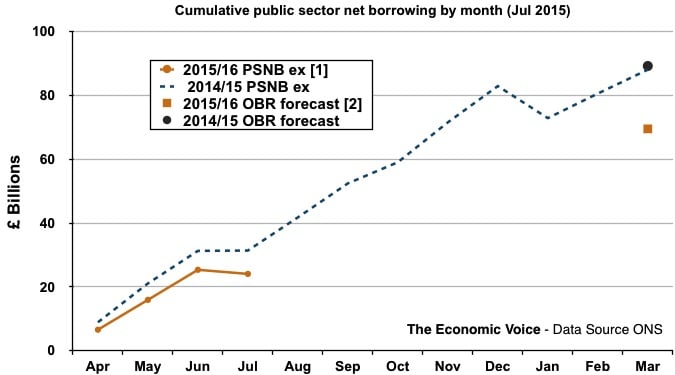 “This was the first July surplus for three years, despite it traditionally being strong for the public finances as it is a time when some companies tend to make corporation tax payments. It was also the seventh successive month in which borrowing came in lower than the same period last year.

“Strong growth in tax receipts remained the key source of improvement in the fiscal position, with central government receipts up 3.9% year-on-year in July. The strength of the labour market, in particular the recent acceleration in wage growth, was reflected in income tax receipts rising by 5.3%. And strong corporate profitability has translated into robust growth in revenues from corporation tax of 5.2%. Given that the prevailing economic conditions are supportive, there is good reason to expect the recent strength in tax revenues to be sustained.

“Over the first four months of the fiscal year borrowing totalled £24bn, which is £7.3bn lower than the same period in 2014-15. The OBR’s full-year forecast expects borrowing to fall to £69.5bn, a decline of 21% compared with the last year’s outturn. With borrowing currently running 23% lower, the government appears to be well on track.

“Indeed, there is a good chance that the remainder of the year will see an even greater improvement. Not only will strong economic growth support further strong growth in revenues, but the £3.6bn of fiscal tightening announced in the Summer Budget – the bulk of which comes from in-year spending cuts – will also increasingly take effect. We remain of the view that the improvement in public finances over the next few years is likely to be sufficiently strong so that the government will eventually be able to scale back its planned retrenchment.”

Michael Martins, Economic Analyst at the Institute of Directors, said:

“The fact that the Government ran a surplus, for the first time since 2012, highlights the strength of the UK’s economic recovery. Much of this was due to the strong employment and wage growth we have seen in recent months.

“Tax receipts increased by 4.4% year on year, slightly better than expected, with income tax, national insurance, VAT and corporation tax all boosting the government’s coffers. On the other side of the coin, spending barely increased. These two trends enabled the Government to borrow 24% less than in the same period last year, putting the UK on track to reduce the deficit to a more manageable £67 billion.

“While these figures are positive, there is much hard work still to be done to put the public finances on a sound footing. Although the exact timing is uncertain, we know that a rise in interest rates is coming sooner rather than later. The less debt the UK accrues, the lower the debt interest payments that will need to be paid. This would free up funding for education and infrastructure investment, which IoD members value almost as much as deficit reduction.”

“With the national debt now more than £1.5 trillion and the costs of debt interest so far this year rising to £17.9 billion, the Chancellor should not be complacent about the need for sustained productivity to deliver healthier public finances in the long run.

“When ‎the OECD has warned of the impact of ‎'continued weak productivity’, and productivity has been revised down, there should be a far greater focus on the pressures on exporters and infrastructure constraints facing Britain’s economy.”

Over half of finance professionals feel undervalued in their business