It looks like George Osborne's promise to balance the books of the UK economy has come under further threat as the latest borrowing figures from the Office for National Statistics (ONS) show the deficit increased by £11.6 billion in August, which is £0.6 billion higher than August last year.

This figure is though based on a new accounting system of measures that reallocates some debt. Had the ONS used the old system the figure for August 2014 would have been even higher at £12.5 billion.

The overall government net debt under the new system stands at an eye-watering £1,432.3 billion, which is an increase of £96.7 billion on where the nation stood at the same stage last year.

So far in this accounting year (April to August) the UK has borrowed another £45.4 billion, £2.6 billion more during the same period last year.

Looking at the graph below you can see that this year's debt (the deficit) in red is growing at a slightly faster rate than last year's (blue dotted line). You can also see where the Office for Budget Responsibility's forecast (the red square) for this year lies and make up your own mind as to whether you think it will be met. 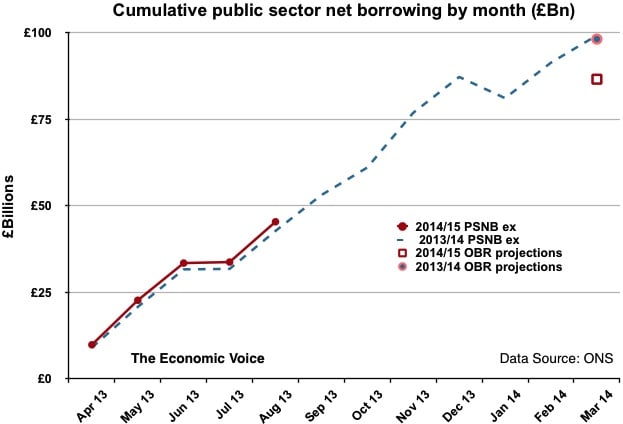 Also remember that the deficit is not the debt. The graph only shows this year's and last year's budget deficits. These have to be added to the overall balance of debt that the nation owes, the approximately £1,400 billion mentioned above. At the current rate this overall figure will be approaching £1,500 billion this year and the interest payments we have to make as a result is in the tens of billions just to service it. How many schools and hospitals etc could we buy for that?

When remembering into the dim distant past of the last general election the current coalition government was left a very short note saying that there's no money left (Liam Byrne to David laws). What will the coalition pass on after spending hugely more? And more worryingly what has an incoming Labour or Conservative led government got to offer after the next election except more debt that can almost certainly never be paid off?

But of course that's up to us, the electorate. If we believe all the promises of spending today for growth tomorrow then we will of course just keep voting for the same old policies for the easy life now with no eye to our own and our children's futures.

How much longer can we pretend that this 'economic recovery' is anything other than another government debt fuelled mirage?

"The chances of the Chancellor enjoying a fiscal windfall from the strong economic recovery in time for the Autumn Statement are looking increasingly slim. Rather than being in a position to offer some tax or spending sweeteners to kick in before next May's General Election, he may be faced with the unpalatable choice of announcing further fiscal tightening or a slippage of deficit reduction plans.

"The period from April to July had seen the fiscal year get off to a disappointing start, with borrowing running ahead of the deficit in the same period in 2013/14. August's deficit has, if anything, worsened this picture, running £700m above the level in August 2013. With the effect of last year's income shifting fading, near-stagnant pay growth seems to be playing the chief role in holding back tax receipts growth."