UK occupational pensions are now under fire from the EU.

It is feared that the review on the Institutions for Occupational Retirement Provision Directive from the European Insurance and Occupational Pensions Authority could lead to the closure of UK occupational pensions.

The results of the EU based review would affect both final salary (Defined Benefit-DB) and defined contribution (DC) schemes as a result of directives that come about from the review due this week.

The EIOPA is proposing that a ‘Solvency II’ style of capital regime designed primarily for insurance funds also be applied to pension funds.

The Minister for Pensions and LibDem MP for Thornbury & Yate, Steve Webb, has said that this proposal would cost the UK pensions industry Â£100 billion as well as accelerating the demise of the final salary pension.

PricewaterhouseCoopers (PwC) has put the cost at £600 billion for those running defined benefit schemes. As a result it says that employers would look to just offering the minimum auto-enrolment pension to avoid the problems. This would have the effect of finishing both DB and DC occupational pension schemes off PwC said.

The highest estimate for the cost of Solvency II on the UK pension industry of £1 trillion came from JLT Pension Capital Strategies.

The head of PwC’s pensions group, Raj Mody, said (actuarialpost.co.uk/article/pension-schemes-under-solvency-ii-threat-1712.htm) "While attempting to improve pension scheme security, these new rules could actually kill off occupational pension schemes altogether. The additional costs for companies would ultimately be borne by individual savers, who would see less generous pensions, whether defined benefit or defined contribution. The plans would therefore work against the initiatives the UK Government is planning to encourage long-term saving.” 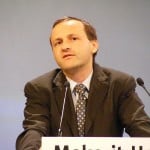 “We reckon the cost on UK business would be in the range of £250bn-£500bn. In terms of the impact on the UK economy this is like wiping out a quarter of the FTSE100.”

“Other consequences include a bigger administrative burden for businesses as they seek to prove they can stand by their schemes to face less onerous funding requirements. Even then, the extra capital burden would provide companies with greater desire to remove historic defined benefit liabilities from their balance sheets, causing a surge in pension transfer incentive exercises."

The Trades Union Congress, National Association of Pension Funds and the Confederation of British Industry have written to the president of the European Commission, Jose Manual Barroso warning of the impending disaster for UK pension funds.

The Minister for Pensions has already lobbied the EU to allow the UK to use the guarantees provided by the existing UK Pension Protection Fund (PPF) instead of imposing whole new rules on the UK pension industry. This would get rid of the whole problem.