Dividend cover for the index of 350 leading shares, a measure of how affordable and sustainable company dividends are, has hit a near six year low, according to new research by The Share Centre.

The analysis, using data from The Share Centre’s Profit Watch UK report and the Capita Asset Services UK Dividend Monitor, shows that dividend cover has fallen to 1.2x, down from 1.5x twelve months previously. Based on profits of £102.8bn made by the UK’s top 350 listed firms in the year to the end of March 2015 and reported by the end of June 2015, dividend cover is now at its lowest level since the third quarter of 2009, when it stood at just 0.7x.

Dividend cover is a ratio defined by profit after tax divided by dividends paid.  The higher the ratio, the greater the comfort that a company can afford, and can sustain, its dividend payouts. A lower ratio means a cut in the dividend is more likely if profits fall. 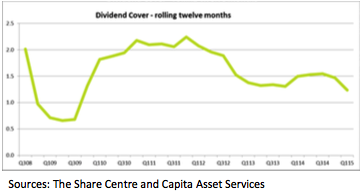 Net profits of the UK’s largest firms have been hit heavily by a series of global and sector difficulties, from the currency headwinds to commodity price falls, and most recently, the supermarket price war. As a result, net profits have fallen significantly, down to £102.8bn on a rolling annual basis in Q1 2015, falling by £16.8bn compared to a year ago. In contrast, FTSE 350 dividend payments have risen to £83.1bn, up from £79.9bn a year ago. As a result, coverage ratios are under pressure.

Only three industries’ dividend cover improved in the past year, while seven saw them fall. Oil & gas and consumer services companies saw the largest falls in their dividend cover, after the plunging oil price and the supermarket price war took their respective tolls on profitability. 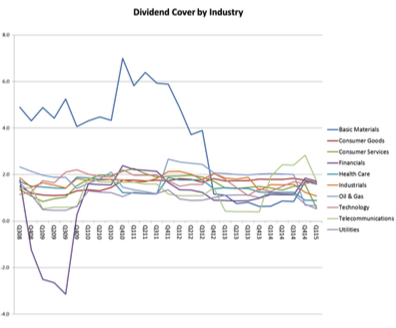 The consumer services group (which includes supermarkets) saw dividend cover fall from 1.4x to 0.6x in the last year. Although dividends fell by 12% in the period, net profits fell even faster, down by a staggering 59%, both as margins were squeezed and as companies wrote down the value of their assets. In the supermarket sector, plunging dividend cover presaged dividend cuts, with Tesco, by far the largest payer in the sector, cancelling its annual payout altogether.

The dividend cover among oil & gas firms fell to 0.7x, with annual net profits 65% lower than a year ago.

Technology saw its coverage ratio rise to 1.6x. Financials saw a rise to 1.7x, as banking profitability bounces back much faster than dividends, though these are now accelerating, while basic materials (which include mining firms) also saw cover increase to 1.6x. However, the improvement to dividend cover ratios for these companies is mainly because large asset write-downs have not been repeated, boosting the annual comparison. The sector remains under pressure, with Glencore cancelling its dividend for the coming year as profits collapse in the face of the renewed commodity crunch.

FTSE 250 firms are doing much better than their large cap counterparts. Their dividend cover is significantly higher, and has been since the end of 2013. It currently stands at 1.5x, compared to 1.1x in the FTSE 100. The ratio in the FTSE 100 is now at its lowest level since the third quarter of 2009.

“Dividends are much less volatile than profits. Shareholders keep up the pressure on managers to sustain annual payouts, even in the face of falling profits. With balance sheets flush with cash for the most part, companies will allow dividend cover to fall until it reaches breaking point, particularly if profits are hit by accounting factors such as asset write downs. Eventually, if they don’t anticipate a rapid bounce back in the bottom line, they throw in the towel and cut the dividends. Glencore is a recent case in point. It is crucial investors understand these dynamics at play in sustaining or growing a dividend payout before making an investment decision.

“Profits among the country’s largest companies have been repeatedly knocked by slew of global headwinds and sector specific difficulties. Commodity price falls, currency swings, slowing global growth and, most recently, supermarket price wars have hit profitability in the FTSE 100. In turn, dividend cover has been stretched, with the majority of companies maintaining or expanding their payouts to shareholders, despite margins being squeezed.

“The picture is somewhat rosier in the 250. It has been less exposed to negative global trends, and as mid-cap companies outperform their large-cap peers, dividend cover has been under less pressure.

“For the UK’s listed companies as a whole, we believe balance sheets are strong enough to allow dividends to continue to grow, even if profitability takes time to recover, but high profile dividend cuts at some of Britain’s famous corporate names demonstrate that investors cannot take dividend growth at individual companies for granted.” 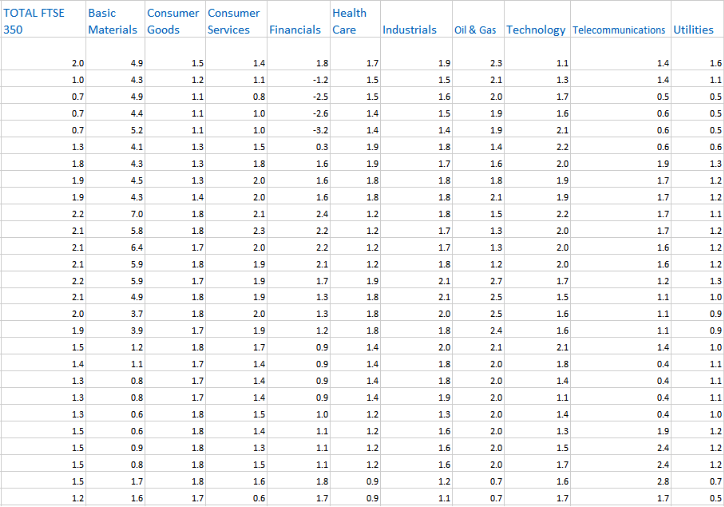 The researchers used data published in the The Share Centre Profit Watch UK to calculate rolling annual profits from the UK each quarter.  They calculated rolling annual dividends from the Capita Asset Services UK Dividend Monitor in the same way.  Dividends were calculated with one quarter lag compared to profits because dividends are paid after profits are declared; the researchers judged the lag made for a better comparison between the two.  Note that the Profit Watch UK uses FTSE 350 profits, whereas the Capita research at sector level uses the FTSE All Share.  The difference is immaterial, because the profits and dividends of small cap firms outside the FTSE 350 only add around 1.5% to the total, well within the one decimal place quoted for dividend cover in the tables and text above.  Differences may be slightly larger at sector level, but the researchers did not warrant the error to be significant. It should be noted that all figures are collated on a whole index or whole sector basis, and have not been adjusted for individual companies that do not pay a dividend , but whose profits/ loses have been included in the aggregate calculations.
Data Source for Profit Watch UK: The Share Centre via FactSet Research Systems Inc.

The poorest to see declining living standards up to 2020

Why does it take longer to open a checking account than to get a loan?