UK production rose 0.4 percent in May and by 2.1 percent in the year to May 2015. The mining & quarrying sector saw the largest rise in May of 4.9 percent.

Manufacturing output however fell by 0.6 percent in May 2015 compared to April 2015

Commenting on the publication of the latest index of production figures by the Office for National Statistics, TUC General Secretary, Frances O’Grady, said:

“The Chancellor promised a ‘march of the makers’, but manufacturing is still five per cent below its pre-recession peak and is declining again. At least the Grand Old Duke of York marched them up to the top of the hill before he marched them down again.

“The government has had over five years to strengthen manufacturing, and has failed. But it’s no surprise when so much of the investment that would have made a difference has been cut, such as funding for catapult centres for technology and innovation in manufacturing.”

“Industrial production output in May bucked expectations, rising by a further 0.4% compared to April and taking annual growth to a 13-month high. 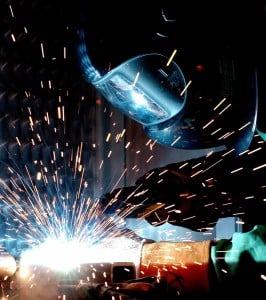 “However, the details of May’s data were not as reassuring as the headline number suggested. The rise in overall production was more than accounted for by a surge in oil and gas production, which followed hefty monthly rises in March and April. The ONS, citing evidence from the Department of Energy and Climate Change, suggested recent tax incentives announced in the Queen’s speech could be a contributing factor to this growth.

“In contrast, manufacturing output fell by a monthly 0.6% in May, compounding April’s 0.4% drop.

“The fall was broad-based, with output in eight of the 13 manufacturing subsectors declining. And it looks like the manufacturing sector has continued to put in a soft performance since May. June’s manufacturing PMI showed the sector putting in its weakest performance in more than two years. And it is unlikely that manufacturers have yet felt the full effect of sterling’s recent appreciation.

“Overall, May’s number means that, even if industrial output merely held steady in June, Q2 output would still be 0.9% up on Q1 – further evidence that GDP growth in Q2 should have comfortably exceeded the 0.4% expansion in Q1.”