Productivity data published for 2014 by the Office for National Statistics (ONS) puts the UK economy output per hour 20 percent below the average of the rest of the G7 advanced economies.

The ONS says that UK output per worker was also 20 percent below the rest of the G7.

Looking at current price productivity per hour worked, the UK came below all the other G7 countries bar Japan.

On a constant price basis The UK fared worse than all the other G7 nations except Italy. 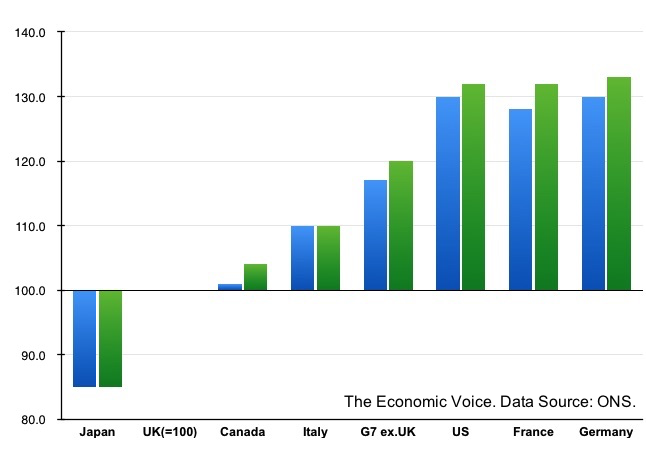 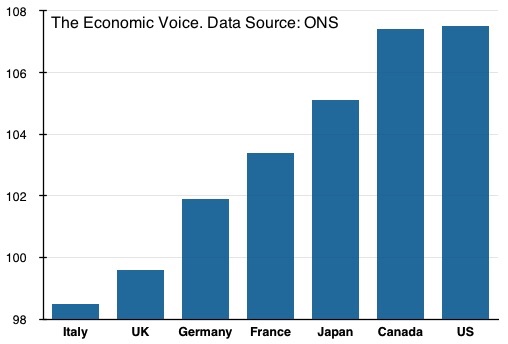 “Without a step change in productivity growth, the UK economy will struggle to deliver secure jobs and higher living standards.

“We need a better economic plan focused on higher public investment in modern infrastructure and workforce skills. A new round of severe public service cuts and pay freezes will keep the UK in the slow lane.”

“It is not surprising to see that the UK continues to lag our G7 competitors in terms of productivity. There is, however, a significant silver lining to the structure of our economy. Britain has struck a balance between an open, competitive economy and a sensible level of employment regulation which should be the envy of Europe. We have high employment, strong wage growth and a level of flexibility which encourages entrepreneurship and innovation.

“The United States, which has embraced agile markets, shows the potential of free and open economies to boost productivity. While we would not – and could not – replicate every element of the US economy, there are lessons Britain can learn. A closer collaboration between universities, businesses and investors, and a warmer embrace of equity finance for instance, will help create the knowledge-intensive, risk-taking and entrepreneurial businesses which will drive productivity gains.

“In the era of major technological change, we should arguably be focusing more on ‘agility’ than ‘productivity’. The firms which are most productive are often the biggest, with deep specialisation in niche areas that have considerable economies of scale. But the economy of the future looks set to be dominated not by big companies, but by fast, agile, quick-moving and reactive ones. The firms that can respond to consumer demands most effectively and bring new products and services to market will reap the rewards.”

The Share Centre explains why St James' Place is a 'Buy'