It should be remembered however that all the time we run with borrowing the total stack of debt we owe keeps increasing.

The ONS says that the UK general government gross debt stood at £1,651.7 billion at the end of August 2015, which was equivalent to 88.4% of Gross Domestic Product. 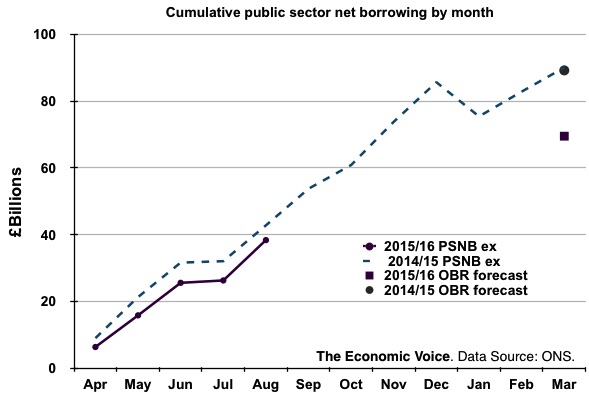 “August recorded the largest deficit in three years, well above the consensus prediction of £9.2bn. Coming after a rise in borrowing in July on a year earlier, the size of August’s deficit offers further cause to believe that the Government’s deficit reduction ambitions are facing headwinds.

“While borrowing of £38.4bn in the first five months of the 2015 fiscal year was 10% below that recorded in the same period a year earlier, the OBR’s full-year forecast for 2015/16 requires a 22% cut in the deficit compared to 2014/15. In addition, August’s disappointing number reflected a 0.6% annual fall in central government receipts alongside a 1.6% rise in spending. In comparison, the OBR predicted receipts growth of 4.1% for the fiscal year as a whole and a 0.9% increase in spending in its July forecast.

“Granted, timing issues were at play in pushing down receipts growth. Notably, income tax from self-assessments plummeted by 53% in August, but this followed very strong growth from receipts from this source in July. However, corporation tax receipts also dropped, down 16.8% y/y. On a positive note, VAT receipts were up by 3.1%, the best performance since April.

“Overall, timing issues in August emphasise the volatility of the public finances numbers and caution against reading too much into one month’s data. But with the economic recovery also appearing to have cooled a bit recently, higher than expected borrowing may mean that the Chancellor will have to ‘go easy’ when he announces his Autumn Statement and Spending Review on 25 November.”

“Severe public spending cuts have failed to clear the deficit. They have slowed down the recovery and held back wage growth, leaving income tax revenues and national insurance receipts much lower than expected.

“With interest rates for government borrowing close to zero, the government should boost the economy with investment in skills, infrastructure and affordable housing. This would be a much better plan for long-term growth and stable public finances.”

James Sproule, Chief Economist at the Institute of Directors said:

“It is good news that the deficit continues to creep down from its unsustainable levels reached during 2008/09. All the time the government spends more than it collects, however, the total stock of public debt continues to rise. The OBR estimates the UK will still owe more than 70 per cent of its GDP to creditors by the end of the decade. This is assuming steady growth and no external shocks – something which, of course, cannot be guaranteed.

“This demonstrates the vital importance of continued restraint in the public finances. More than eight in ten IoD members support the government’s plans to run a budget surplus by the end of the parliament. However, they are clear that spending on value-for-money infrastructure projects and education must be prioritised.”