The UK's debt pile grew another £52.7 billion higher over the last 12 months according to the latest data from the Office for National Statistics (ONS). The nation's cumulative net debt now stands at £1,581.6 billion, which is equivalent to 82.8 percent of UK Gross Domestic product (GDP).

When looking at this on an annual basis, the UK public sector net borrowing (excluding public sector banks) for the period April 2015 to January 2016 was £10.6 billion less than the same period in the last financial year and now stands at £66.5 billion. 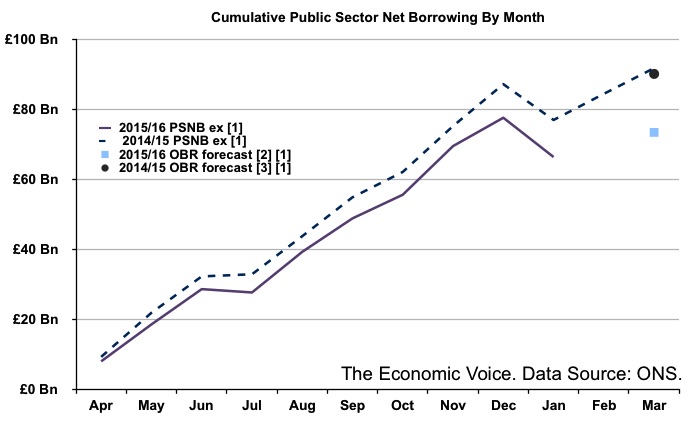 This means that the debt is still increasing, but the rate at which it is growing is slowing. The Chancellor still has a long way to go to balance the books. Also, looking at the graph above, we could overshoot the OBR forecast for 2015/16.

For the month of January, public sector net borrowing (excluding public sector banks) was in surplus as is usual due to self-assessed income tax receipts. At £12.4 billion the surplus was £0.2 billion more than in January 2015.

"January is a crucial month for public finances, with self-assessment payments for the 2014-15 tax year due at the end of the month and corporation tax instalment payments payable by medium and large onshore companies and oil & gas firms. Hopes were high that these sources would yield strong revenue growth but in the end both turned out to be disappointing. Self-assessment receipts were up just 1.6% on a year ago, while corporation tax receipts were down nearly 8% on January 2015.

"The UK needed a very large January surplus in order to have any chance of getting close to the OBR's full-year forecast of £73.5bn. Borrowing over the first ten months of 2015-16 was £66.5bn, while the final two months of 2014-15 saw the government borrow almost £15bn. With this being the final public finances release before the Budget, it seems certain that the OBR will have to revise up its forecast for this year. The important questions then are by how much and what will the implications be for future years.

"If the final two months of the fiscal year see a similar improvement to the previous ten months, borrowing will come in at around £79bn, around £5½bn higher than the OBR's November forecast. Whether or not the OBR judge this to be permanent will be crucial given that this overshoot represents around half of the Chancellor's margin for error against his fiscal rules. The OBR's call will depend on the degree to which they judge the recent weakness in tax receipts, which is a result of weaker than expected nominal GDP growth, to be a cyclical or structural phenomenon."

Raisin makes saving possible with a minimum of 1,000 Euro