UK regulatory bodies have fined firms over Â£1billion since 2007

The Fraud Investigation and Dispute ServicesÂ  team at Ernst & Young released new research yesterday revealing that the total fines issued to UK firms and executives for fraudulent activity has exceeded Â£1billion in the past five years, with 68% of the fines being applied to the financial services industry (which equates to 55% of the total value).

“It is worrying to see that the regulators have needed to step in so frequently and issue punishments of this severity to businesses and executives. Just under half of the penalties handed out in the past five years have been monetary fines and the market, for the most part, is not in a condition for businesses to be losing money due to negligence. These results should serve as a stark warning to all businesses in the UK to get their houses in order.

“Whilst the results vary across different industries, firms should be mindful that these are not isolated situations, and fraudulent actions can occur across all industries and all sizes of business.”

The study’s findings also revealed that individual prison sentences across all regulatory prosecutions ranged from eight months to ten years, with partners and directors receiving the heaviest punishments. The research reveals that since 1997, the average prison stay of a convicted fraudster – either acting individually or on behalf of a company – is 2,000 days. 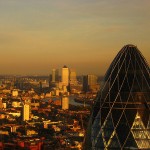 Canary Wharf and Gherkin by Harshil.Shah

“The extent and variation in the level of fines and prison sentences sends a clear message to UK businesses and their employees that misconduct will not be ignored. Board members will need to take a good look at what they are doing and undertake a full risk and systems review in order to identify any blind spots and identify who the fraudsters are. Firms that fail to take appropriate action in this area not only risk fines and sentencing, but may also cause irreparable damage to their brand.”

Additional findings from the research include: