• Rents in the UK fell by 0.3% in May compared to the same month a year ago, the first such fall since December 2009; the average monthly rent now stands at £901

UK rental price inflation fell for the first time in almost eight years in May, new data from HomeLet reveals. The average rent on a new tenancy commencing in May was £901, 0.3% lower than in the same month of 2016. New tenancies on rents in London were 3% lower than this time last year.

May’s decrease in average rental values marks a significant moment for the rented property sector. This is the first time since December 2009 the HomeLet Rental Index has reported a fall in rents on an annualised basis. The pace of rental price inflation across the UK has been slowing in recent months, having peaked at 4.7% last summer.

In addition to the fall in rents in the capital, four other regions of the UK saw rents on new tenancies decline during May. The North-East of England, the South-East, Yorkshire & Humberside, and Scotland registered falls ranging from 2.3% to 0.6%. HomeLet’s regional data is available in more detail via an online interactiveinfographic.

The slowdown in the rental sector mirrors a similar picture elsewhere in the housing market, with Nationwide Building Society revealing in June that house prices had fallen in each of the past three months.

The slowdown in the London market has seen average rents fall from £1,572 a month last July to £1,502 in May. Last month’s 3.0% annualised fall was the steepest decline seen in the capital since 2009.

“May 2017 saw average rents nationally fall for the first time in eight years when the economy had suffered the shock of the financial crisis. HomeLet rental data suggests landlords are now facing a difficult balancing act between ensuring rents are affordable for tenants in a low real wage growth environment whilst covering their own rising costs.

“Tenants will still need a vibrant and growing rented sector to provide them with property options at the time of their choosing. Any constraint to the supply of rental properties, because landlords are unable to achieve the reasonable returns they require, cannot be in the long term best interests of tenants, especially if, as we’ve now heard from all the main political parties, the UK’s population continues to grow.”

Rental figures from the May 2017 HomeLet Rental Index 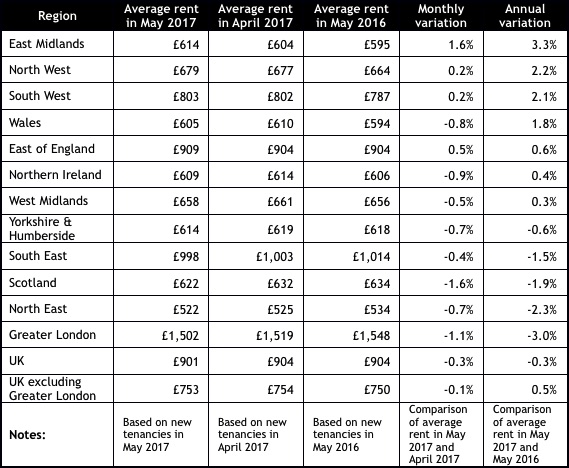 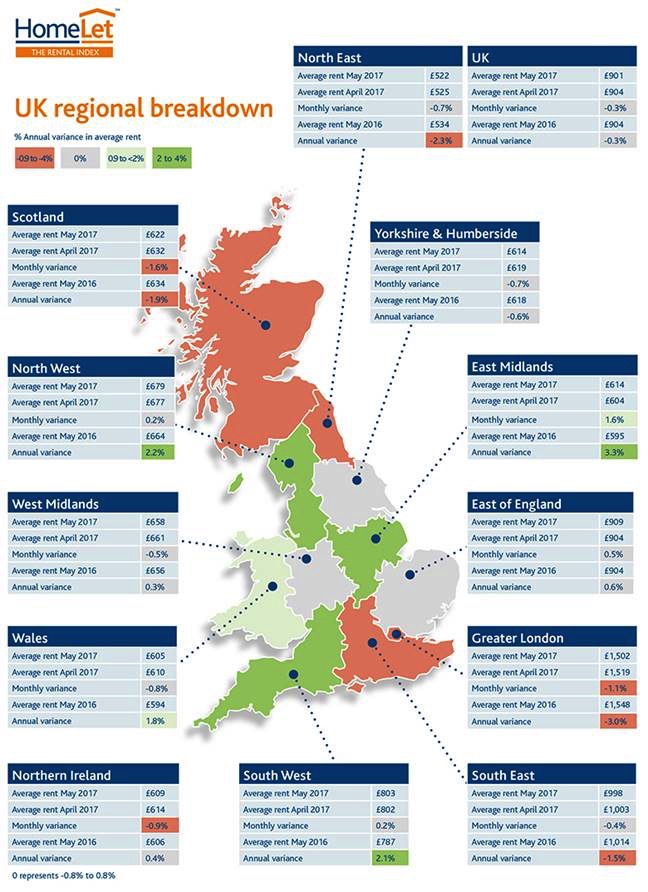 ‘Successful ageing’ linked to harmful drinking among over 50s