• Savers say they need £23,457 per year as a comfortable retirement income;
• UK pension funds could only support that income for five years;
• Average pensions pot would only pay out £6,011 per year in today’s money.

The gap between retirement aspiration and reality is revealed today as new research shows that funding a comfortable retirement would leave millions of pension pots empty after just five years.

The year-long investigation into Britain’s savings and debt habits, involving more than 8,000 savers, has revealed that people in Britain are putting aside only a quarter of the amount needed for a comfortable retirement. This means a clear choice is emerging for savers – to change radically their saving habits or to work longer and accept a ‘minimum wage’ retirement.

The ‘Savings Gap’ campaign by financial and technology services firm True Potential was launched in August 2013 to examine the true state of Britain’s personal savings and debt habits, as well as the preparations that individuals are making for their retirements. One of the key aims was to identify the standard of retirement that savers are on course to enjoy and just how far away they are from the retirement that many dream of.

Savers have responded by stating that in order to enjoy a comfortable retirement, they would require £23,457 per year as an income from their savings and pension. That target would need a total fund of £469,140 from which savers could draw down five per cent over 20 years.

Based on current savings levels however, Brits are only on course to build a retirement fund worth £120,213, meaning that it could only support the desired annual income for five years before becoming exhausted.

Experts at True Potential believe that Britain urgently needs to rediscover its appetite for saving and investing if those aspirations are to be met.

The effects of the financial crisis, low interest rates, and easy access to high cost credit through payday loan companies are blamed for the creation of today’s Savings Gap – the difference between what people need to live comfortably in retirement and the amount they are actually on course to receive. This has been compounded by decades of poor financial education and complicated regulations.

Since August 2013, True Potential has asked more than 8,000 Britons about their personal finances and provisions for retirement. The findings clearly show that a crisis in old age is looming with people saving barely a quarter of the amount they will need to live comfortably.

Over the last 12 months, savers have put aside £2,671.60 towards their pension pot. Over a working lifetime of 45 years, that would build a total fund of £120,213 leaving savers with an annual income of just £6,011 per year throughout their retirement. Only four per cent of savers believe they could live comfortably on that amount of money.

The figures do show that the amount of money British savers have put aside for retirement has been steadily increasing over the last 12 months, though still nowhere near what would be required to achieve a comfortable retirement. Men are consistently managing to put more money into their retirement fund – £3,321.17 per year compared to women who are saving £2,046.40 per year. 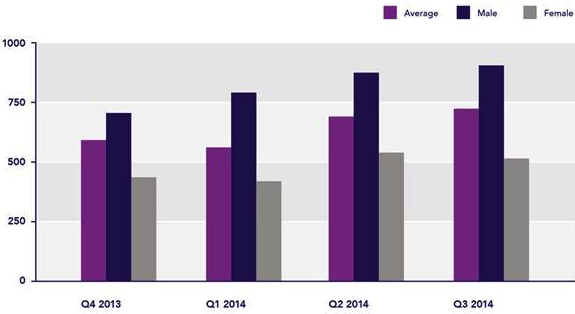 True Potential has also compared all UK regions. Based on the savers in that region’s desired income in retirement (full regional breakdown attached). The results show that:

“These figures show the size of the problem we face as a nation. Britain is sleepwalking towards an impoverished retirement and the reality for many in society today is that they will simply be unable ever to retire. That is a scary prospect and we should be in no doubt about the radical overhaul of financial education, regulation and culture that will be required to address this.

“The seeds of the Savings Gap were sown in non-existent personal finance education, overly-complicated products and a buy-now-pay-later culture that has become part of society. We have also become a nation of cautious investors, preferring to save in cash, which simply means that inflation is destroying the power of those savings every day.

“Most people describe themselves as balanced or even cautious investors and who can blamed them, after seven years of financial hardship brought on by excessive risk-taking? However this approach only means millions of people will never hit their retirement goals. The answer is not to lower our aspirations for retirement but to raise our savings game now as a country. That means far better personal finance education and far simpler products that allow savers to assess risk properly and make the right decision for themselves.

“Our relationship with our savings and investment is also outdated. Traditionally, we wait for the annual statement to drop through the letterbox to see how our finances are performing and that needs to change. Checking on the performance of our investments should be as easy to do on-the-go as it is to check Facebook. Topping up our savings on impulse should be as simple as buying a book or DVD online.

“By changing the way we interact with our finances, we can begin to swing the pendulum back towards savings and that is our best hope to close the Savings Gap.”

In May this year, the first free module developed by the Open Univiersity’s True Potential Centre for the Public Understanding of Finance (PUFin) was launched on FutureLearn. The aim of the course is to improve the general public’s understanding of personal finance which True Potential believes lies at the heart of a sustainable savings culture in the UK.

More than 15,000 registered for the initial module. The Managing My Money course is also now available on its permanent home – Open University’s OpenLearn platform – allowing clients to learn at their own pace. It is intended for those with an interest in developing their personal financial capability but who do not have previous experience studying the subject.

“True Potential’s research brings into sharp focus a risk that people may not fully appreciate: longevity risk – the risk that they outlive their pension savings. As we live longer, this becomes more of an issue.

“On average, a 65 year old man is now expected to live to age 83, a woman to age 85. It also starkly highlights the risk that people moving into retirement could face a significant shortfall in their pension income. At best, this may mean a more modest retirement that people hoped for; at worst, some may face real financial hardship in their later lives.”

True Potential Investor includes impulseSave® – a first of its kind feature that allows micropayments to be transferred directly into investments to keep savers on track or to reach their financial goals faster. People can invest with as little as £1 or as much as needed to close their ‘gap to goal’.

Portugal on the verge of a bail out

IDS resignation is not about BREXIT