UK inflation, as measured by the Consumer Prices Index (CPI), was zero over the twelve months to August 2015 reports the Office for national Statistics (ONS). This is a slight drop from the 0.1 percent seen in the year to July 2015.

The ONS put this down to a smaller rise in clothing prices on the month compared to a year ago as well as downward pressure from motor fuel prices and sea fares. These were offset by rising prices for soft drink and furniture & furnishings.

Using the old Retail Prices Index (RPI)method inflation to the year August 2015 was 1.1 percent, and using its improved variant, RPIJ, inflation was was 0.4 percent. 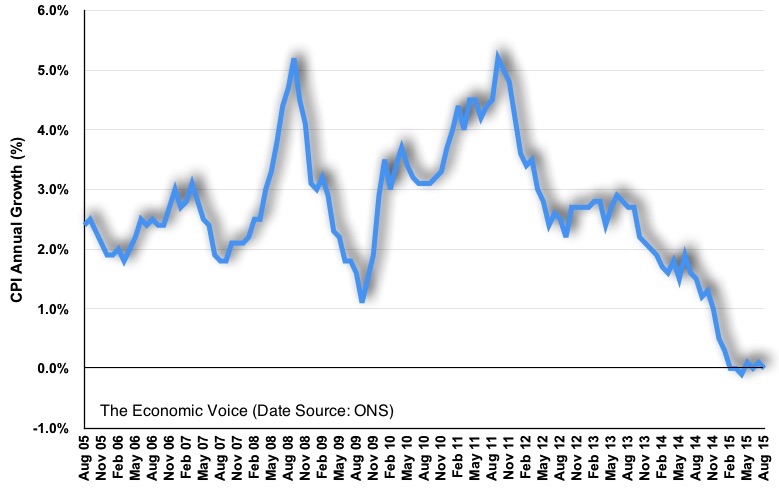 "Inflation remains stubbornly low as the price of essentials – food and fuel – continues to fall. This will be of little concern for the vast majority of British businesses who may now have more spare cash to invest. Over the next few years this could help drive much-needed productivity increases, as firms buy or upgrade equipment, machinery, and technology – decisions they delayed during the early stages of the recovery.

"For households, a temporary period of low inflation is boosting spending power and increasing demand. Real wage rises, which remained so elusive during the downturn, are coming through across the private sector and look set to remain a feature of the recovery. Combined with low unemployment, one of the highest levels of vacancies since 2001, and strong domestic growth, the UK economy continues to look healthy. This is despite economic uncertainty and shaky confidence in some of the UK's largest trading partners, notably China and the Eurozone.

"Therefore, the Bank of England must not let today's figures stand in the way of normalising interest rates. Their mandate is to target inflation over a two-year period, where it is set to return to a more typical level. Moreover, the drivers of low inflation are outside of their control. Given the strength of the UK economy, pickup in output, tightening labour market, and tentative signs of productivity increases, the Bank of England must be prepared to follow the Federal Reserve if it raises rates on Thursday."

"Zero inflation is not a route to raising living standards. And with future economic prospects so uncertain, early interest rate rises would bring real risks to households.

"The recovery can't be taken for granted and we need significant investment in skills, innovation and infrastructure to boost productivity and ensure a sustainable economy that works for the many and not just the few."

"CPI inflation nudged down from 0.1% in July to 0% in August, extending the period in which the headline measure has oscillated in a narrow band between +0.1% and -0.1% to seven months.

"The August outturn represented something of an upside surprise given that falling fuel prices, the unwinding of July's spike in clothing prices and base effects had appeared set to send the headline rate back into negative territory. In the event, the behaviour of petrol and clothing prices was largely as expected, but these downward pressures were partially offset by upside surprises for food and, to a lesser extent, furniture prices. As we suspected, last month's sharp pickup in core inflation proved to be something of a false signal, with the August data showing core inflation softening from 1.2% to 1%.

"There is still an even chance that we will see the CPI measure turn negative again in the next couple of months. The renewed drop in oil prices is steadily feeding through to prices at the pumps while recently announced price cuts for domestic gas bills will hit the index next month. Added to these factors, today's producer prices data suggested that disinflationary pressures have intensified in the supply chain, while core inflationary pressures remained subdued.

"In this context, it is no surprise that the MPC has become more dovish lately. Though we still expect inflation to pick up from the latter part of this year, once the sizeable base effects caused by last year's collapse in oil prices begin to kick in, the headline rate is likely to remain some way short of the 2% target next year. Indeed, the CPI measure is likely to remain below 1% until the spring so, assuming that the MPC would prefer not to hike interest rates while simultaneously having to write an open letter to explain an undershoot of the target, this would suggest there is little risk of a rate hike until well into 2016."