The latest Marki/CIPS UK Sevices PMI has shown the strongest acceleration in growth since March 2011.

And in further good news employment has risen at its sharpest pace for nearly six years.

This says Markit/CIPS is down to an increase in new business, which in turn has led to a backlog in work encouraging companies to take on new staff.

The services PMI has risen from 54.9 in May to 56.9 in June, moving further away from the neutral '50' figure and further into growth.

"This is the latest in a string of encouraging data releases which confirm that the UK is well on the road to recovery. Finally the services sector appears to have rediscovered its mojo and it is generating a momentum which looks less and less likely to be derailed.

"The PMIs are flagging renewed momentum across the economy, with the three surveys reporting 4-5pt increases in the activity balances since February. A pessimist could say that we’ve been here before, most notably in 2011 when the recovery soon fizzled out. But this time it looks different, with the surveys also reporting much stronger order books, both at home and abroad, which suggests that this time the pick-up in activity has genuine legs. Throw yesterday’s BCC survey into the mix as well and you have evidence of a broad-based pick-up.

"These results put us on track for GDP growth of 0.5% or more in Q2. If we ignore the distortions caused by one-offs, such as the Olympics, then this would be our strongest quarterly growth for two years. 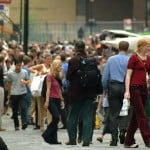 "The chances of more QE this month were always very low, but this release must reduce it to almost zero. Indeed, we could even see some of those who have voted for more QE previously move back across the table to re-join the majority. As things stand, the only way that we can see further QE happening is of the Bank decides that gilt yields are rising too quickly and need to be reined in."

"This really is impressive stuff –the services sector has outstripped market expectations time again this year.

"Optimism and confidence in the private sector is clearly building and the BoE credit conditions survey also points to increased lending, so things are really looking up.

"I’d be really surprised if this resulted in anything short of a 0.5% Q2 GDP figure.

"Clearly this eases the pressure on the MPC to support the recovery and frankly I’d be amazed if the MPC saw a strong case for more quantitative easing at tomorrow’s meeting.’’

Gibraltar and the UK nuclear deterrent