The UK’s services sector showed its slowest pace of growth in the three months to February.

The Markit/CIPS services purchasing managers’ index fell from 56.0 in January to 53.8 in February. Although still above the neutral figure of 50 it was lower than expected where most had predicted something in the order of 54.8.

But at least it gives good hope that any double dip to the recession will not occur.

On a more positive note, although only marginal Markit/CIPS said that employment rose again for the third month on the trot.

Chris Williamson, Chief Economist at survey compilers Markit said “Despite seeing some loss of momentum in February, the service sector continued to grow at a robust pace, adding to signs that a double-dip recession will be avoided. So far this quarter, the sector has notched up its best performance since the spring of 2010, when the economy was rebounding strongly from the recession.

“Combined with the ongoing modest growth in manufacturing and upturn in the construction sector, the latest services PMI data suggest that the economy will expand modestly in the first quarter, provided that no significant further loss of momentum is seen in March. The outlook in fact seems to have brightened, with business confidence about the year head hitting a 12 month high and firms again taking on more staff in February.

“However, the rate of job creation remains disappointingly weak, and firms often have to offer discounts to win new business, providing reminders of how tough the business environment remains for many companies.”

David Noble, Chief Executive Officer at the Chartered Institute of Purchasing & Supply said “Businesses in the services sector remain decidedly confident this month, based on expectations for activity growth and perceptions that the Eurozone crisis may be starting to stabilise. Buoyed by the steady growth in business activity since the start of 2011, admittedly below pre-recession levels, there is still much to feel upbeat about.

“The biggest challenge for businesses in the current operating environment is to protect margins in a market where customers have the upper hand on pricing. Although input cost rises continue to ease, the pressure to discount and undercut the competition is acute. 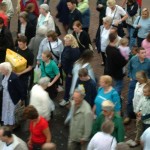 People on the Move

“The expansion of headcount is also a casualty of this pressure, as businesses look to control costs and maximise the resources already available to them. Employment levels are likely to stay broadly flat until there is a more pronounced and sustained growth in activity.”

Commenting on the figures Nida Ali, economic advisor to the Ernst & Young ITEM Club, said “Despite a fall in the headline balance from last month's high, it's encouraging that the services PMI indicated another month of solid growth in activity. The strength of the orders pipeline also suggests that output may continue growing in the coming months.

However, as with the retail sector, heavy discounting appears to be one of the main drivers of output growth. Underlying demand is still fragile and companies are having to accept lower margins in order to secure business. The services sector still faces a challenging environment and we are seeing a slow grind towards recovery.

These figures, along with the encouraging manufacturing figures last week, suggest that a technical recession will probably be avoided after all, with GDP likely to post a small increase Q1. However, the outlook further out is still dominated by downside risks, stemming from the Eurozone crisis and the potential for an increase in oil prices.”