As the US, UK and French governments pour over the available intelligence it appears more and more likely that we will be taking some sort of arms length military action against Syria's Assad regime in response to what western intelligence sources claim is proof that Assad used chemical weapons against his own people. And it seems that we will do this even if the United Nations opposes the move.

But after the 'dodgy dossier' days of the last Iraq war there is still deep scepticism amongst many people concerned that the UK is being drawn into another lengthy military campaign.

Looking through the press there seems to be a lot of use by various politicians of the word 'judgement', not cast iron proof.

But there are reports that the US now has in its possession the radio traffic proof as well as satellite imagery that will put the situation beyond doubt.

One hopes so because firing long range missiles into Syria will almost certainly cause collateral damage, possibly killing innocent men, women and children. What then if the 'proof' is then proven wrong? Especially when we will not have the full backing of a UN mandate.

This scepticism and unwillingness amongst the general UK public to get involved in another battle when we have so many problems back home is reflected in a YouGov poll for the Sunday Times (see chart below).

This shows that the people are largely against anything other than humanitarian aid being sent to strife ridden Syria. Even the sending of small arms is largely opposed.

There will be a debate in the House of Commons tomorrow (Thursday) followed by a vote and it seems that the three main political party leaders will be urging their members to vote for military action. Let's all hope that they have access to solid intelligence this time. 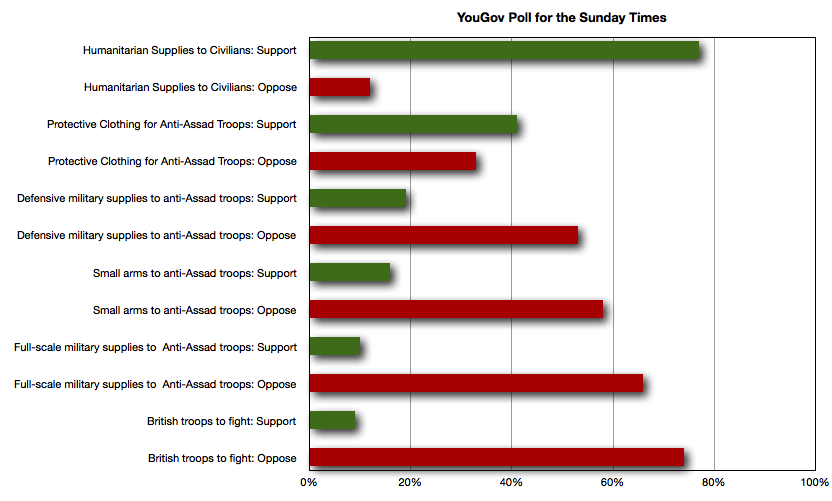 European Security in Time of Enlargement