Summary: The UK's trade balance deficit was £3.1bn in July, compared to £1.3bn in June and £1bn in July of last year. In this the Economic Research Council has taken a look at the contributions that the export and import of goods and services make to the overall trade balance.

What does the chart show? The chart prepared by the Economic Research Council shows the total value of all exports and imports of goods and services in billions of pounds, adjusted for inflation (so prices are equivalent to July 2013 prices) and seasonally adjusted. Exports of goods and services are shown by the solid blue and red lines respectively. Imports have been inverted, because they count as a negative influence on the trade balance, and are shown by the dotted blue (for goods) and red (for services) lines.

Why is the chart interesting? Over the past 15 years, the value of goods that the UK has exported has gone up by £5 billion in real terms. However, the value of goods we have imported has also increased, but by almost £15bn, leading to a £10bn increase in the trade deficit of goods. On the other hand, the value of the services we have exported has increased by over £8 billion in real terms, while imported services have only increased by roughly £3.5bn, representing a positive influence on the overall trade balance.

Although services are the UK's strong point from a trade balance point of view, the trade in physical goods remains a much larger proportion of our overall trade. The cause of the £2bn increase in the trade balance deficit in July was a sharp decline in the exports of goods, combined with an increase in imports. Hopefully it is just a blip, much like we saw at the beginning of 2012. 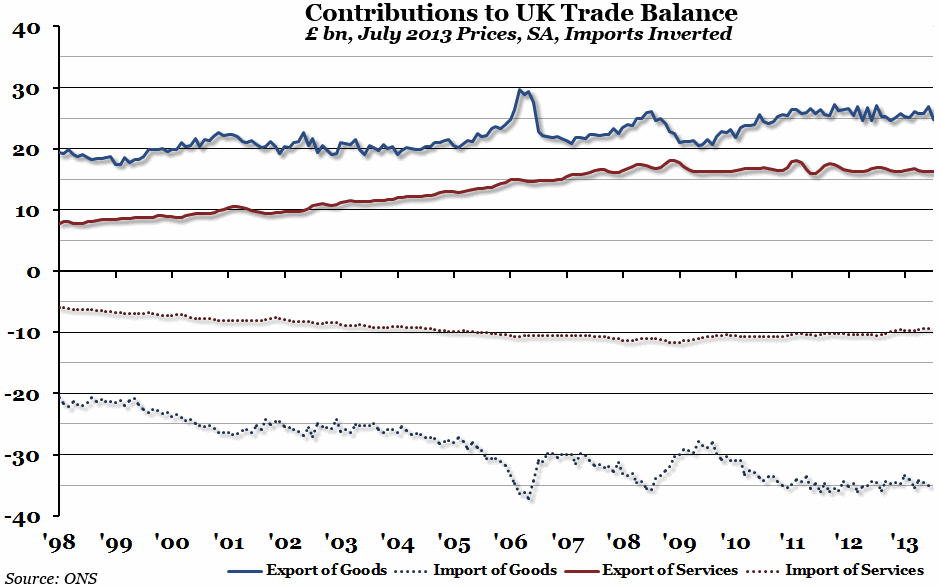 Action Alert: end campaign of intimidation and destruction of forests in East Kalimantan