The UK economy saw its goods and services deficit fall to an estimated £1.4 billion

The UK trade deficit fell by £1.6 billion to £1.4 billion in September, the narrowing being attributed to a decrease in the deficit in trade in goods to £9.4 billion compared to the £10.8 billion seen in August. 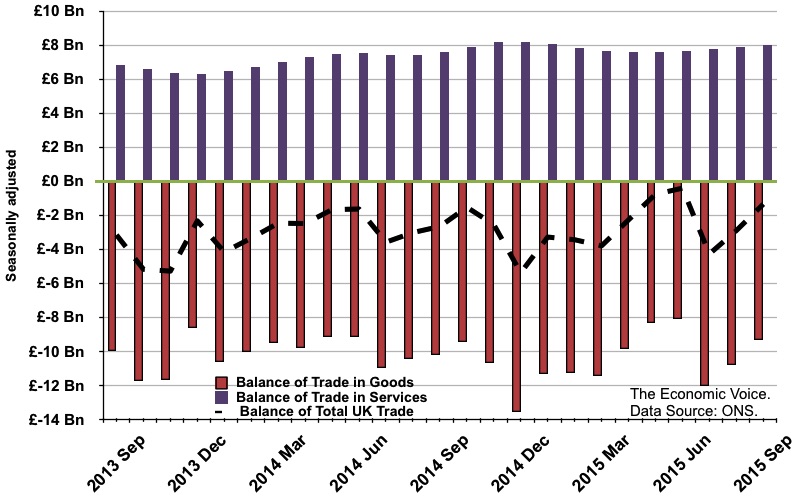 Allie Renison, Head of Europe and Trade Policy at the Institute of Directors said:

“Early signs that Britain may finally be putting a dent in its mammoth trade deficit are clearly good news. The value of services British firms sell overseas is at a record high, and our deficit in the trade of goods has also narrowed, albeit slightly. These figures prove British firms can hold their own against international rivals, though we must not pretend all is solved. Our trade deficit is still gaping, and there is a long way to go to meet the government’s ambitious target of doubling exports to £1 trillion by 2020.

“Businesses are counting on government to promote free trade and help secure international deals which will make it easier for them to tap into the world economy. The United States is the number one market for UK exporters, while exports to the European Union remain sluggish. This should highlight just how important a far-reaching and comprehensive EU-US trade deal is. The Transatlantic Trade and Investment Partnership will unlock new markets for British firms and harmonise regulations across a number of industries, helping them sell high-quality goods across the Atlantic with ease.

“Companies want to sell their wares as far and wide as possible, so policymakers must do all they can to make that happen. UTKI has a vital role to play on this front. Growth in Britain’s dominant services sector will be key to making future progress, and UKTI should be making every effort to build awareness of international opportunities and demand for UK companies from these industries.”

“Following August’s surprise 1% monthly surge in industrial production, September saw only a modest pull-back. On another positive note, manufacturers increased output at the fastest rate since April 2014, pointing to a sector coping reasonably well with a difficult global environment.

“Looking ahead, the strength of October’s CIPS manufacturing survey suggests that decent output growth in September may not just be a flash in the pan. Moreover, the export orders balance of the same survey saw a surprise rise, reaching the highest level since May.

“So alongside a sharp decline in September’s trade deficit, what have been the long-running weak spots in the UK economy are looking a bit healthier. As a result, the launchpad for growth in Q4 is looking reasonable, with growth in the last three months of the year possibly putting in a better performance than the 0.5% seen in Q3. However, we will need more evidence before judging that a corner has been turned.”