The estimates of the UK’s trade deficit on trade in goods and services increased from £0.9 billion in May to £1.6 billion in June says the Office for National Statistics. This estimate was made up of a £9.2 billion deficit in goods trade , partially offset by £7.6 billion surplus in services trade.

On a quarterly basis the second quarter saw a deficit in goods and services of £4.8 billion, narrowing by £2.7 billion compared to quarter one. An increase in the export of chemicals, fuels and machinery & transport equipment helped exports in goods increase in Q2 by £3.1 billion to £74.5 billion. Imports rose by £0.1 billion to £102 billion in Q2. Exports in services fell by £0.1 billion in Q2 whilst imports rose £0.2 billion. 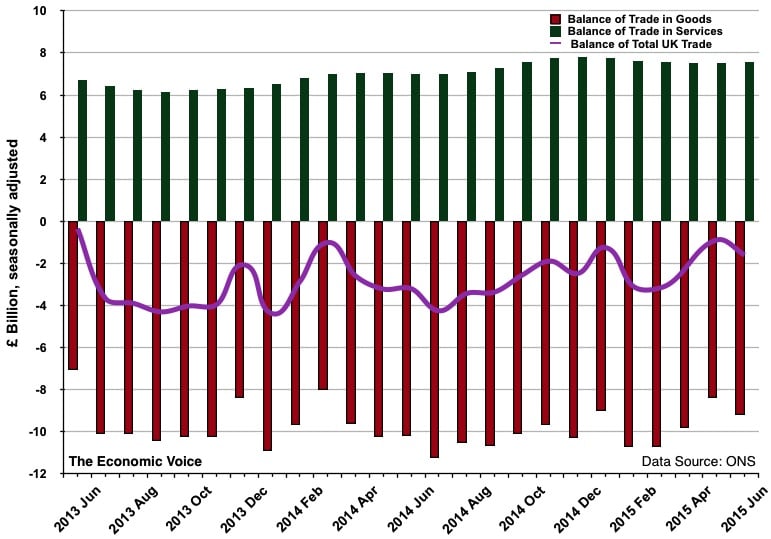 “The deficit in Q2 was the smallest for four years with all of the improvement founded on a sharp rise in exports, with imports remaining flat.

“It is worth noting that both outturns are inconsistent with other indicators. The recent business surveys have painted a universally gloomy picture on exports, while manufacturing output contracted in Q2. And the strength of consumer demand means that the lack of import growth looks odd.

“The geographic breakdown of exports offers some confirmation that exports to the Eurozone are being constrained by the sizeable appreciation in the value of the pound against the euro. Exports of goods excluding oil & erratics to non-EU destinations were up by 6.4% in Q2, far in excess of the 1.8% growth in exports to EU destinations.

“Overall, even if the Q2 strength is not subsequently revised down, it is difficult to envisage the firmer data persisting, given the ferocity of the headwinds coming from the strong pound.”