The latest figures from the Office for National Statistics (ONS) shows that the UK’s trade deficit increased in November 2011 to Â£2.6 billion compared to October’s Â£1.9 billion.

This increase was mainly due to an increase in the seasonally adjusted figures for the deficit in the trade of goods only from Â£7.9 billion in October to Â£8.6 billion in November.

This was only marginally balanced by an increase in the seasonally adjusted surplus in services of Â£0.1 billion from October’s Â£6 billion to Â£6.1 billion in November.

Commenting on these figures Andrew Goodwin of the Ernst & Young ITEM club said that the figures had actually held up ‘surprisingly’ well as ‘some deterioration’ had been likely and that a fall in GDP for 2011 Q4 should be expected.

He went on to say that UK companies should be looking to take advantage of opportunities to export to faster moving emerging economies and not become ‘complacent’.

Trade data can be incredibly volatile from month-to-month and some deterioration was always likely after October’s surge, but the UK’s trade performance held up reasonably well in November. The trade deficit remains lower than it was for much of 2011 and, while export volumes slipped back from the October peaks, they remain surprisingly firm given the slowdown in the global economy in the second half of 2011.

We are still on course for net trade to make a firm positive contribution to GDP growth in 2011Q4. Unfortunately, the weakness of the domestic economy is likely to mean that this won’t be enough to prevent GDP from falling in Q4.

While exports held up well at the back end of last year, it would be a mistake to become complacent. The Eurozone crisis continues to cast a shadow over short-term prospects and we are reminded of the scale of the challenges ahead by Germany suggesting that its output is likely to have contracted in Q4. The UK is pinning much of its hopes on exports to power the recovery, but with our main markets struggling it’s imperative that exporters look to new, faster-growing, markets if they are to play their part. The UK lags well behind other developed economies, such as Germany, in its penetration of emerging markets, but with our traditional markets facing a long, hard struggle, the time is right for UK exporters to make that move. 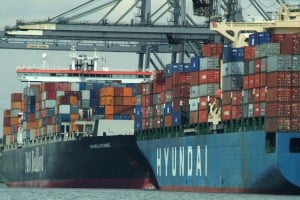