Last week the Pound fell dramatically from recent highs against peers like the Euro, Australian Dollar and New Zealand Dollar as investors responded to a disappointing 'Super Thursday' of Bank of England (BoE) announcements. The BoE was seen to have pushed back interest rate hike expectations to 2016 and Sterling accordingly tumbled against a number of its most traded currency counterparts. However, the Pound has managed to recoup some of its losses against the US Dollar and cling above the 1.41 level against the Euro this week in spite of the latter currency being supported by the latest developments in Greece. However, if Wednesday's UK jobs data shows the decline in positions and average earnings anticipated by economists, the Pound could be in line to post additional losses over the next few days.

A long-awaited announcement from Greece regarding the nation reaching an agreement with its creditors over its third bailout saw the Euro advance on several of its peers on Tuesday. If the deal is agreed by European Finance Ministers, Greece could receive the funding in time to repay the European Central Bank (ECB) on August 20th – an outcome which would help make 'Grexit' fears a distant dream and increase the odds of the nation recovering its footing in the currency bloc. The common currency was also supported by better-than-forecast ZEW Economic Sentiment and Current Situation surveys for the Eurozone and Germany respectively. If this week's inflation and growth numbers for the Eurozone are positive the common currency has the potential to continue moving away from last month's seven-year low against the Pound.

Friday's US Non-Farm Payrolls report revealed that the nation added slightly fewer-than-forecast positions but that average earnings increased in line with estimates. The data was taken by some as proof that the US economy could handle higher borrowing costs and the 'Greenback' accordingly gained on a number of its peers. However, since then conflicting remarks from Fed officials have contributed to a deflating in confidence relating to a September alteration. Should the upcoming US Advance Retail Sales report demonstrate a sturdy increase in consumer spending, the flames of interest rate hike speculation will be fanned once more and the US Dollar could post broad-based gains as a result. Conversely, an unexpected decline in sales would have a detrimental impact on demand for the world's premier reserve currency.

Hints from the Reserve Bank of Australia (RBA) that its interest rate cutting cycle was at an end helped the Australian Dollar recover from a six-year low against the Pound last week. However, the 'Aussie's uptrend was swiftly reversed after the People's Bank of China (PBoC) took action to devalue the Chinese Yuan. The central bank's policy reforms triggered a broad-based selloff of the Yuan but also sparked notable losses in commodity-driven and emerging-market currencies. The RBA might be planning to leave interest rates on hold for the foreseeable future, but the slowdown in China and persistent downtrend in commodity prices are likely to keep the 'Aussie' under pressure and against the US Dollar and Pound. 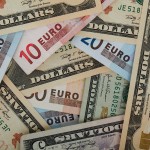 Yet another dismal dairy auction left the New Zealand Dollar in freefall last week as investors bet that the weakness in New Zealand's key commodity could prompt the nation's central bank to cut borrowing costs further before the close of the year. Although the 'Kiwi' did go on to recover some of its declines and moved away from a multi-year low against the Pound on general Sterling weakness, developments in China ensured that the GBP/NZD exchange rate returned to the 2.3774 level at the beginning of this week. With manufacturing and retail sales reports for New Zealand scheduled for release before the weekend and both ecostats potentially impacting RBNZ rate expectations, the 'Kiwi' could be in for further movement.

Friday's Canadian employment data showed that the nation added slightly more jobs than expected in July and that the unemployment rate held steady. However, with oil prices remaining below the 50 Dollars a barrel level the 'Loonie' failed to see much benefit. The PBoC announcement, coupled with the news that the price of crude oil fell to a fresh eight-month low, left the Canadian Dollar struggling at the start of this week and commodity price shifts are likely to continue having an impact on demand for the 'Loonie' in the days ahead.

Spain on the brink