Protests will be held across the UK on 12 July against the EU-US trade deal, trade unions and campaign groups announced today. The protests will take place ahead of the next round of talks on the deal, scheduled to begin in Brussels on 14 July.

The announcement comes as Vince Cable, the US ambassador to the EU, the chief EU trade negotiator and other government and business figures meet at Chatham House in London today to discuss the future of global trade.

Protests against the Transatlantic Trade and Investment Partnership (TTIP) are planned in London, Cambridge, Manchester, York, Newcastle, Nottingham, Edinburgh and Glasgow. Campaigners want the EU to abandon the deal, which they say threatens democracy, the environment, and public services including the NHS.

Twelve of the 73 UK MEPs elected last month have pledged to work [1] for a full-scale re-think of the EU’s trade and investment policy, and for trade rules that ‘serve people and the environment’.

The House of Lords European Union Committee told parliament in May that EU member states were ‘losing’ the public debate on the deal.

“Politicians on both sides of the Atlantic have been completely taken by surprise by the scale of opposition to this deal. They seem to have thought they could agree it behind closed doors without anyone noticing. But the deal threatens so many things people hold dear – public services like the NHS and education, safety and environmental standards built up over many years to protect citizens, and even the power of government to make laws in the public interest. If it is agreed, it will be the biggest corporate power-grab we’ve ever seen.” 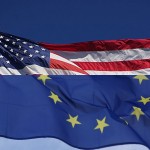 “Our public services are fundamentally different to private enterprise and should be treated separately when it comes to making deals with the US and other nations. The UK higher education sector is already a priority for many for-profit US education companies, some of whom have an unsavoury reputation for aggressive marketing and poor standards. Reducing our government’s ability to regulate these companies, and allowing them to challenge policies designed to protect the public interest, would be an outrage.”

“TTIP is an attack on democracy. It is a corporate bill of rights, that will give multinational corporations unprecedented power over our common resources and welfare system, imposing once again the destructive paradigm that profit must always come before people and planet. We need to make our voices heard now, before it is too late.”

“The UK government is already losing the debate over TTIP, as people learn of the threat posed by the negotiations to jobs, food safety and public services. Yet politicians continue to promote the deal regardless of the dangers it poses, in the face of growing public anger. TTIP serves the interests of transnational capital at the expense of popular sovereignty and social rights. The UK government and the European Commission must listen to the people of Europe and halt the TTIP negotiations now.”