UK workforce feels increasingly satisfied and secure in their roles

* Job satisfaction is up by 10% since the beginning of 2013, with two thirds (67%) feeling satisfied or very satisfied in their roles

* Confidence levels are highest among middle and senior management

UK workers are more confident and satisfied in their roles than they were at the start of the year, indicating a continued strengthening of the labour market. Mid-year market insight from REED, which canvassed the attitudes of 1,500 employers and employees, reveals an increased sense of optimism among the workforce.

The findings come amid a flurry of reports indicating a more positive footing for the jobs market and the wider economy.

According to the REED research, this upbeat mood is most pronounced in Greater London, the South East and Scotland, where workers have the highest confidence levels in the strength of their local economy and the strongest sense of job security.

Almost half (47%) of workers in Greater London are confident their region could create jobs and boost the economy and 82% said they felt secure or very secure in their job. This compares to lower confidence levels for these factors in Northern Ireland, Yorkshire and the Humber and the North East.

Nationally, 43% of workers said they were actively looking for a new role or would start the search in the next 12 months. Interestingly, job seeking is most prolific among workers in the East of England (50%), Greater London (49%) and Yorkshire and Humber (47%).

Tom Lovell, Group Managing Director at REED, said: “It is encouraging to see this continued upward trend in confidence and satisfaction since the start of the year. The level of job seekers has also held firm since the start of the year and together this builds a picture of a more stable and buoyant labour market, which is good news for employers and employees alike.

“Interestingly, our data shows that job security is most keenly felt by middle (77%) and senior management (80%), which is encouraging given this group’s grasp on the health of their organisation. The mood of the workforce is set from the top, so we may see an even more optimistic outlook in the coming months as this attitude filters through UK businesses.” 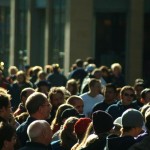 The survey showed a reduction in the prevalence of employee rewards compared to the start of the year, with 32% receiving a pay rise in the last 12 months, compared to 39% in January.

Tom Lovell commented: “Our data also shows that the majority of employers (58%) are concerned about losing talent from their organisations. This is not surprising when we are seeing the combination of rising employee confidence and falling employee rewards. As a result, we expect to see more activity within the labour market as it improves and employers increasingly realise they will have to review their approach to employee rewards to both attract and retain the best people.”