UKIP Leader Nigel Farage has today called for the return of a Civil Defence Corps to harness the expertise of volunteers to help respond to disasters and major emergencies.

Mr Farage said the disbanding of Britain’s civil defence organisation way back in 1968 was a huge mistake, leaving volunteers with expertise in particular areas not knowing who to contact in order to help out in a crisis.

He singled out a Sikh volunteer he met during his visit to flooded communities in Somerset as demonstrating just how much potential support existed in civil society.

"We have seen fantastic work by the likes of Khalsa Aid and Ravinder Singh in Somerset, but Mr Singh told me it would have been a great help to him and his team had there been an official point of contact for community volunteers to liaise with.

“There are thousands of civil servants in Whitehall. It cannot be beyond the wit of man to arrange for a small number of them to run a civil defence contact point.”

The UKIP leader called on David Cameron to take up the idea immediately. “He spent years trying and failing to explain what he meant by a Big Society. And in recent years he has just stopped talking about it at all. Well, here is a concrete example of a good idea that really would harness the expertise and energy of private citizens to the common good.” 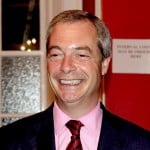 Mr Farage pointed out that the previous Civil Defence Corps was abolished by the Wilson Labour government in the late 1960s, adding: “This was an era of the big state and socialism in which politicians removed power and responsibility from ordinary citizens. I would hope Mr Cameron would recognise that that was a retrograde step.”

The Isle of Man, Republic of Ireland and Australia have retained their civil defence apparatus – meaning private individuals with expertise can be swiftly and productively utilised to help in a crisis.

"We as a country are always the first to help those abroad but this would ensure that we can help out those in our own country in their time of need as well," added Mr Farage.

The previous Civil Defence Corps played a major role in the emergency response to several major post-war disasters, including the Aberfan colliery disaster in 1966 and the Lewisham train disaster in 1957.

CIPD Warns Business – Use Top Female Talent Or Lose It